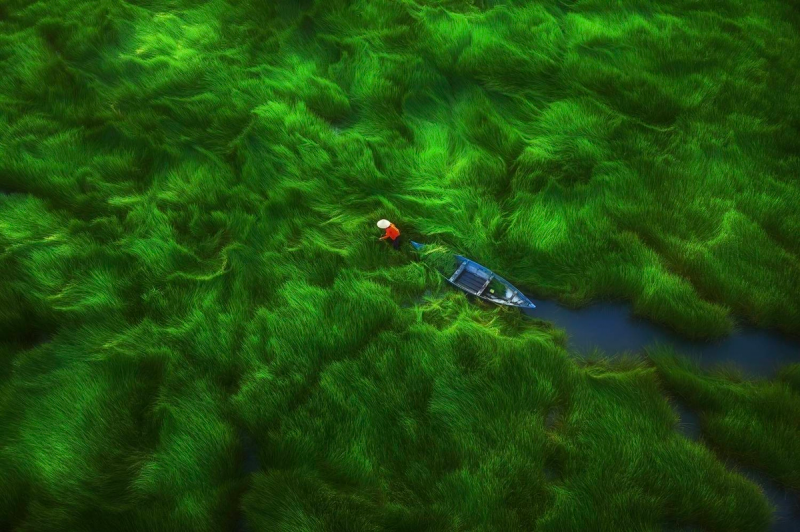 Pham Huy Trung said the picture was taken near Truong Giang River, Binh Hai Commune, Quang Nam Province. In 2018 – 2019, he also won at the 35AWARDS International photography contest. This famous photographer takes his most beautiful shots using his drones, capturing the best moments of nature and people across the country.

His photography, “Passing the sand dunes” taken in Ninh Thuan Province is in the top pictures that won Viewer’s Choice Awards, and “Through the field” is in the top 100 best drone photos of 2020. Winning the second prize of drone category is “Catching fish in the morning” of photographer Nguyen Ngoc Thien (HCMC) capturing a fishing boat pulling nets during the anchovy fishing season at Tuy Hoa, Phu Yen. His other work, “The dancing of the nets” taken in Hon Yen, Phu Yen, is one of top 100 best drone photos.

From May to August every year, Phu Yen will be crowded and bustling with boats in the fishing season. The “dance” of the vast nets floats in water, drifting into a multitude of shapes. Surely, an interesting subject for a photographer to explore. 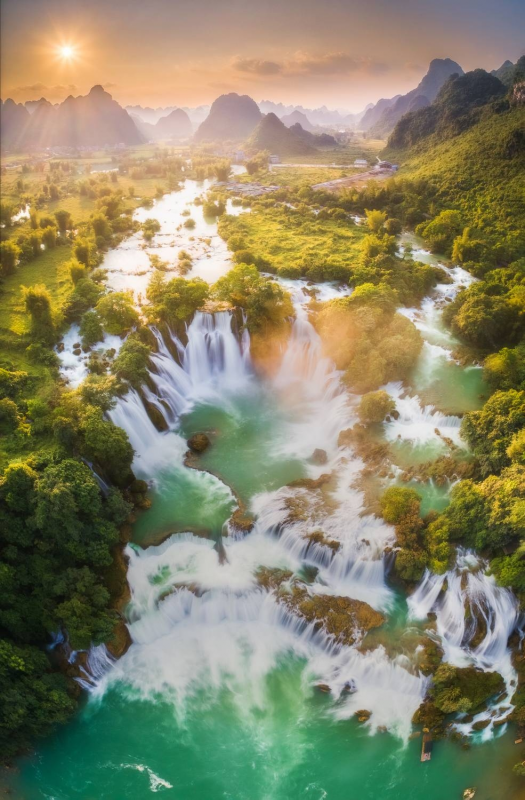 In top 100 best drone photos, there is 21 works of 14 Vietnamese photographers, showing the diverse beauty of landscapes, villages and humans all over the country, in which “Sunset on Ban Gioc Waterfall” of photographer Vu Phi Long (Son La) impresses a lot of people.

Ban Gioc Waterfall is one of Vietnam’s most impressive natural sights. Located in the northeastern province of Cao Bang, the falls are 30 metres high and 300 metres across, making Ban Gioc the widest (but not the highest) waterfall in the country. 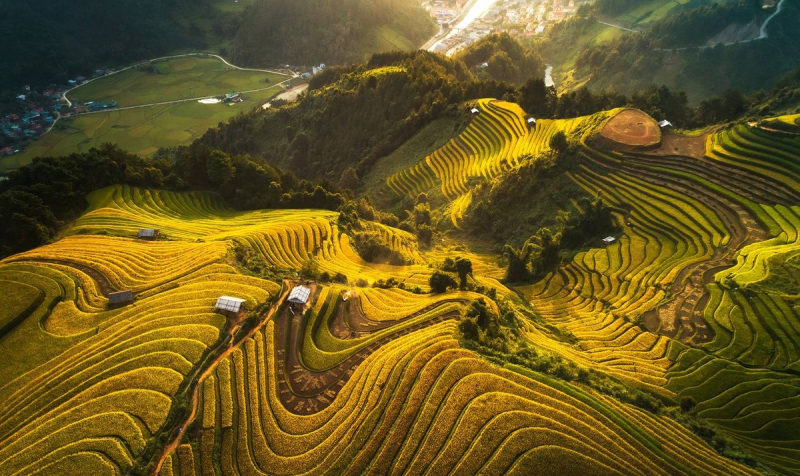 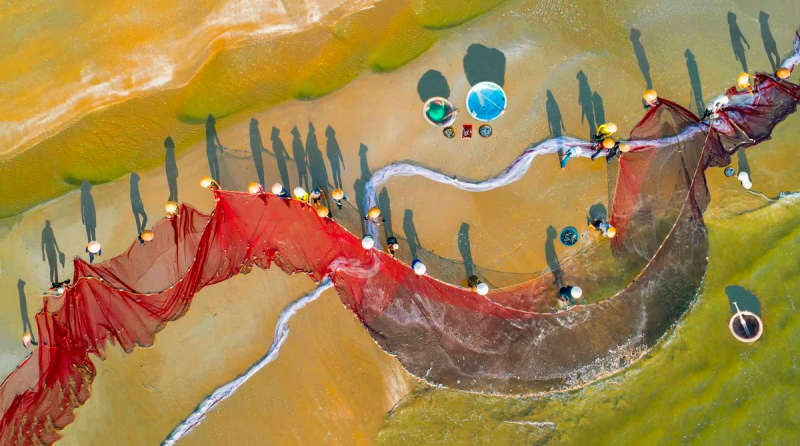 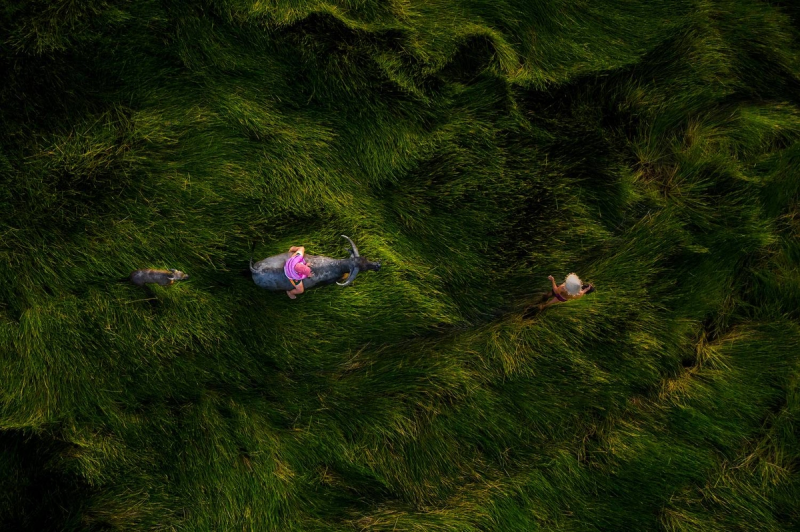 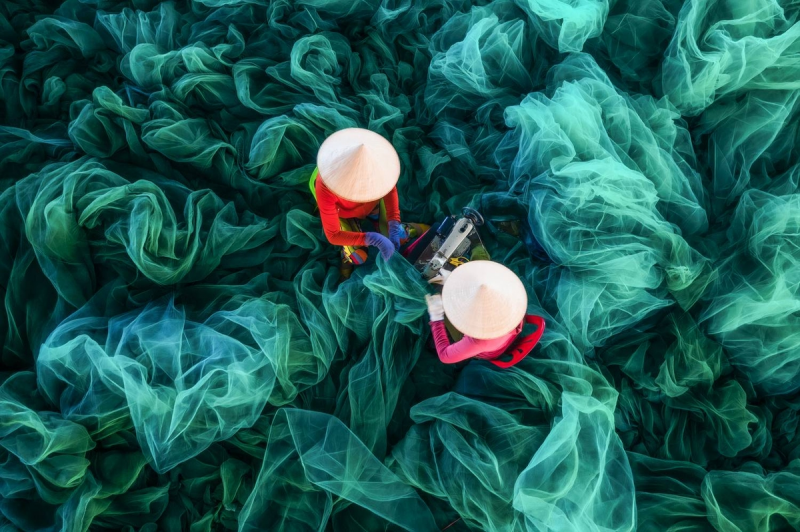 The anchovy season is between the second and eighth lunar months (March-September on the Gregorian calendar this year). If you visit the port early in the morning, you can see fishermen throwing nets to catch fish near shore.

Once the boat is anchored, the fishermen hang the net now with many anchovies after their fishing mission on the side of the embankment of a dam. They proceed to use a long stick with plastic foam attached on one end and repeatedly hit the net so that the anchovy slide down the net placed underneath.

The objectives of the award include the search for the best 100 works of the year in various categories. And since 2017 the definition of 100 best photographers of the year based on the 3 best works.

All photos are estimated anonymously, therefore regalia, merits and popularity of photographers absolutely do not influence the result. This is an excellent chance for beginning photographers to make themselves known and show the whole world their truly worthy work. It is also the best opportunity for professionals to once again confirm their status quo. Unprejudiced and multi-stage assessment will not miss the most interesting shots and find better among them, identifying the 100 most worthy.

Rights to photos belong to their authors only. By participating in the competition the authors give their consent 35AWARDS administration free to use them for the purpose of promoting competition in the various media, print albums, books with the works of the finalists and winners, as well as for the production of works in the exhibition and sale. Use the finalists in the future for special events dedicated to the popularization of the competition.