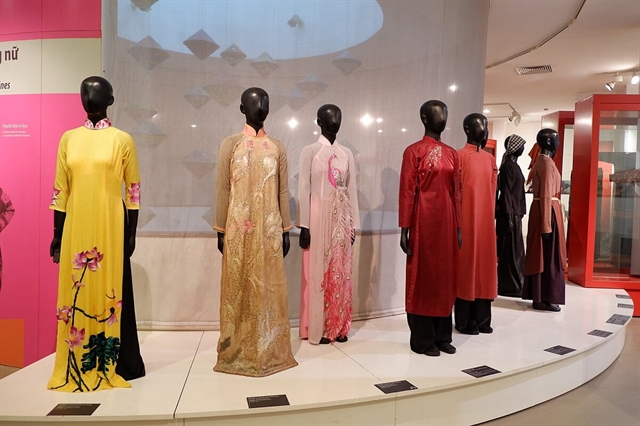 A special exhibition of ao dai (Vietnamese traditional dress) owned by outstanding women in politics, culture and arts is on display at the Áo Dai Museum in Long Thuận Street, Thủ Đuc City. The event is part of the city’s cultural activities to celebrate International Museum Day (May 18). (Photo courtesy of the organiser)

It features a collection of 10 ao dai belonging to political, cultural and artistic stalwarts like Dr. Trịnh Thị Hoa, former director of the HCM City History Museum, and cultural researcher Le Tu Cẩm, who have worked to improve the country’s museums.

The Áo Dai Museum, owned by veteran fashion designer Sĩ Hoang of HCM City, opened in 2014 to share the history of the traditional long dress with foreign visitors and future generations and increase their awareness of traditional fashion.

The museum displays many ao dai designs dating back to the 17th and 18th centuries and their subsequent evolution.

Visitors can try making their own ao dai using paper, and souvenirs such as dolls in ao dai are available for sale.

The exhibition is open every day between 8am and 5pm until June 12.