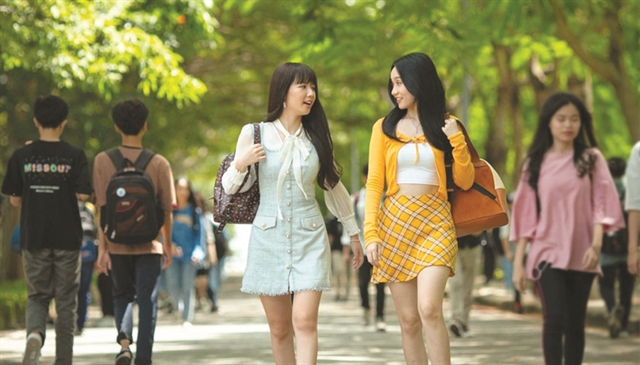 The movie Thien Thần Ho Menh is under negotiation to enter the global market. Photo thanhnien.vn

HCM CITY — Many Vietnamese movies are increasingly being shown in foreign markets.

The movie Bố Gia (with English title "Dad, I’m Sorry”), for example, was released on April 22 in theatres in Singapore and Malaysia, including via the popular Golden Village cinema chain.

Even though the movie’s publisher has yet to give sales statistics in Malaysia or Singapore, the public’s acceptance can be seen by the number of screenings and the duration of the movie’s stay. Bố Gia is still being shown in Singapore.

According to Box Office Mojo, a website specialising in independent box office revenue tracking, Bố Gia ranks 29th in the global chart of movie revenue this year, with more than US$17,129 million.

The Thien Thần Ho Menh movie (The Guardian Angel), prior to its premiere date in Viet Nam, was approached by international firms in countries such as the US, Canada, UK, France, Ireland, Malaysia and Singapore, among other nations. This is a positive sign for the “export potential” of Vietnamese movies.

A similar case can be seen with the movie Bóng Đe (Sleep Paralysis) by director Le Văn Kiet. Even though the film is expected to be screened in Viet Nam in mid-May, it has already been licensed for distribution in 25 countries.

Despite their potential, many producers of Vietnamese movies have not announced figures about their international revenue.

Hai Phượng movie (Furie), directed by Le Văn Kiet, is a rare film with clear sales, with VNĐ160 billion ($6.9 million) in  the domestic market and VNĐ40 billion in the international market.

Though the domestic market remains the most prominent and brings most of the revenue for Vietnamese films, the potential of the foreign market is undeniable, especially with support from the large number of overseas Vietnamese and curious international audiences interested in different cinematic backgrounds.

With multiple awards at international film festivals, the film Cha Cõng Con by Lương Đình Dũng has reached audiences in 16 countries and territories such as the US, Italy, Uruguay, Spain, Canada and India, among others.

“Previously, we only sold the rights to show Cha Cõng Con in theatres, but now its copyright comes in other forms of distribution such as television or DVDs,” Dũng said.

Recently, the film was licensed to be shown at a university in Japan and was released in a DVD version in Turkey.

Dũng added that he has had a lot of experience in negotiating with international distributors. Many “acquaintances" sought out Dũng to make another action movie, 578: Phat Đạn của Kẻ Đien, expected to be released in Vietnamese theatres next August.

“Quality local films are not difficult to export,” he said.

Director and consultant for Film Group (Singapore) Nelson Mok said that in the past it was not easy to convince international film distributors to offer Vietnamese films in theatres because foreign audiences were unfamiliar with this genre.

However, it was the “vision” in the movie Bóng Đe that made distributors agree. It is essential to let the foreign audiences experience Vietnamese films, and then they will want to see more, he said.

Film director Charlie Nguyễn said that local filmmakers need to have attractive storytelling skills, and more importantly, be able to create relevant stories with local values in them.

“Bố Gia is a prime example. We need to tell our own story, not the story that other international movies have told,” he added.

“Watching a movie is no different than going on a trip. Viewers love to see what they have yet to experience,” film director Lương Đình Dũng said. VNS