A group of artists have just finished a gigantic mural spanning over 3,000 square meters which reimagines some 4,500 characters in the historic 56-day battle of Dien Bien Phu.

The artwork is a tribute to the 67th anniversary of the battle which made late Vietnamese General Vo Nguyen Giap one of the 20th century’s greatest military strategists.

According to Luong Xuan Doan, head of the Vietnam Fine Arts Association, the mural is “the country’s new artistic miracle."

Young artists who took part in the project will be given priority to become the association’s members.

A parinting reimagines historic confrontations between the Vietnamese and French armies which ended in the Dien Bien Phu battle in 1954. Photo courtesy of Dien Bien Phu Historic Victory Museum

The oil-on-canvas artwork was painted continuously on a 360-degree space and combined with reliefs by more than 200 artists. It took them about two years to complete.

Domestic critics said the mural was one of the world’s biggest-ever paintings on war.

Divided into four parts, it reimagines the Vietnamese people’s mobilization, the battle’s beginning, historic confrontations between Vietnamese and French forces, and Vietnam’s final victory on May 7, 1954.

According to the museum’s representative, its initial design which was approved in 2012 saved a position for a wide war-themed artwork. However, at the time, no organization or individual was able to realize the vision.

Doan said provincial authorities once invited some foreign artists to do research yet no feasible plan was ever formulated.

In 2015, a group of artists under the Hanoi-based Cultural Heritage Preservation Company presented sketches which later were approved by the National Art Committee.

To win over Russian experts who are famous for creating historical murals, artist Nguyen Van Mac, the company’s director, and his team spent a year doing research and preparing thousands of pages of documents and pictures from the Military History Museum, the Dien Bien Phu Historic Victory Museum, libraries, and archives before sketching the artwork in two years. 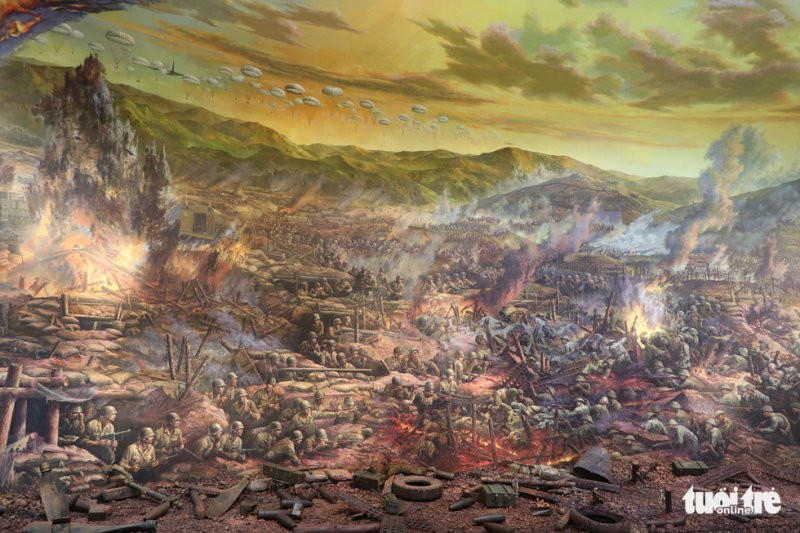 Mac admitted that Russian artists were talented but “they could not reimagine Vietnam’s history the way Vietnamese people do."

He added that they got the final result by pouring their hearts and souls into creating the mural.

Except for Mac, the project’s lead who was born in 1954, other artists are only in their 30s.

“They say young people do not care about history but it is not true,” said Mac about his fellows.

Those artists who have never experienced any war truly created a beautiful epic of people who made the groundbreaking Dien Bien Phu victory 67 years ago.

Some 4,500 characters, both Vietnamese and French, were painstakingly painted based on archived photos on the background of northwestern Vietnam’s majestic nature.

Humanity sparks in time of darkness through a scene in which Vietnamese soldiers take care of injured French prisoners – delivering the powerful message of aspiration for peace.

To convey stories in the artwork, Mac took young people to Dien Bien Province where they talked to witnesses, visited museums and relics to live the old days, and immersed them in the land’s spirit.

According to Doan, the collective mural shows not only artists’ particular abilities but also talents in harmonizing different styles to present the seamlessness in expressive delivery and emotion.

“The mural is not simply a manifestation of the country’s great victory, it is an example of how young people use their artistic instincts to take over social responsibility,” he said.

The destruction of war is reflected in this painting on historic confrontations between Vietnamese and French soldiers. Photo courtesy of Dien Bien Phu Historic Victory Museum