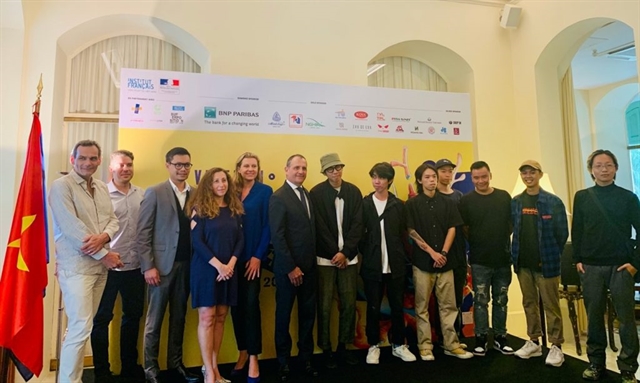 Organisers pose for a photo with artists, who will present a live jam performance at the French Consulate in HCM City on April 24-25. VNS Photo Phương Mai

HCM CITY - Vietnamese street artists will present a live jam performance at the French Consulate in HCM City on April 24-25.

The show will feature six finalists from the JAM - Vietnam Urban Arts 2021 competition held by the French Institute in Viet Nam since February.

The performance will include Vietnamese artists Daos 501 and Vietnamese-French artist Suby One, who have become famous among the street arts community in the country.

At the event, each artist will create a large painting reflecting eight of the United Nations' sustainable development goals.

Vincent Floreani, French Consul General in HCM City, said: “The performances aim to honour street arts in Viet Nam, featuring talented Vietnamese and French artists. All eight paintings will be showcased outside the French Consulate on Le Duẩn Street for two months before touring in big cities across Viet Nam.”

The performances are part of a larger project to bring Vietnamese street arts to the world, developed by France and Germany with the aim of turning HCM City into a new destination for street arts in ASEAN.

Floreani said the project would create a fresh and dynamic image of HCM City that would encourage foreigners to stay in the city longer.

It also helps to bring benefits to the culture and economy by increasing profits to hotels and restaurants and the tourism sector in general.

Frederique Horn, director of the French Institute in the city, said the institute would cooperate with European partners, particularly the Goethe Institute, to launch a series of street arts activities in HCM City in October.

With financial support from the EU through the France - German Cultural Fund, the programme will include workshops at local schools, seminars on street arts, performances of music and hip hop, and a street arts festival.

The programme will gather artists from different fields from European countries and Viet Nam, who will together create amazing wall paintings on the city’s streets.

Horn said that after two performances at the French Consulate on the weekend, the French Institute will upload pictures of the six finalists on its website and Facebook page for votes from the audience.

Two of the contestants with the highest votes and points from the judges, who are experts from the French Institute, Goethe Institute, IDECAF and the Universities of Fine Arts and Architecture in the city, will win a short-term art residency in Lyon, France.

The two performances will be held from 9am - 12.30pm at 6 Le Duẩn Street in District 1. Participants can register for the event at http://bit.ly/Jam-Vietnam-Urban-Arts-2021. VNS