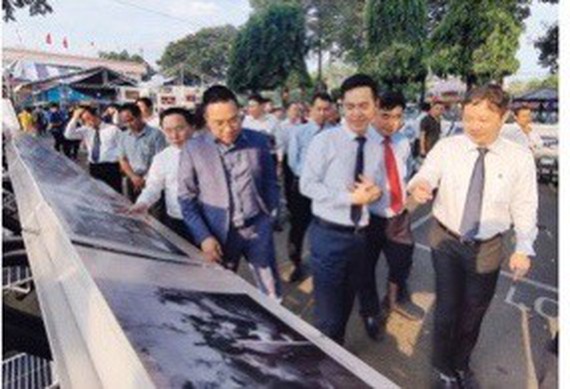 Delegates visit an exhibition marking the 90th anniversary of the founding of the Ho Chi Minh Communist Youth Union in the book festival at Children’s House of Thu Duc City. (Photo: SGGP)

Readers coming to the event will have chances to attend exchanges between writers and readers; the introduction of books; seminars and discussions on the reading culture and more
Additionally, the online edition of the festival took place at the e-commerce trading floor at Book365.vn on April 17. Speaking at the opening ceremony, Deputy Minister of Information and Telecommunications Hoang Vinh Bao said that the annual book day aims to spread the love of books and reading habits, create cultural values from the family to workplace. The book show co-organized by the Ministry of Information and Communications, the CPV Central Propaganda and Training Commission, the People’s Committee of HCMC and the Vietnam Publishers Association will run until April 22. The month long book show at Book365.vn featuring online booths of book distributors and publishing houses will end on May 15. On the same day, another book festival was held at the Children’s House of Thu Duc City by the Department of Information and Communications in coordination with the People’s Committee of Thu Duc City, the State Records And Archives Management Department Of Vietnam, the Ho Chi Minh Communist Youth Union of HCMC and Phuong Nam Cultural Joint Stock Corporation. The event also includes exhibitions of Uncle Ho's revolutionary life and career, the 90th anniversary of the founding of the Ho Chi Minh Communist Youth Union, and the establishment of Thu Duc City.