A couple have recently finished a five-day journey by motorbike though 1,500km in Vietnam's Central Highlands and coastal central region with their three-year-old daughter.

“I had planned for the trip for two months before we departed,” Tran Quang Dinh, a photojournalist at a Ho Chi Minh City-based newspaper told Tuoi Tre News.

“We followed a route through small roads and avoided highways to be safe and able to enjoy the beautiful landscapes,” Dinh shared, insisting that he had seriously worked on his plan to ensure everything was alright during the long trip.

“My daughter really enjoyed the trip and her health was always in good condition during the journey,” the 30-year-old father added.

“Sometimes my wife and I got tired but she wasn’t.

"She always ate and slept well.” 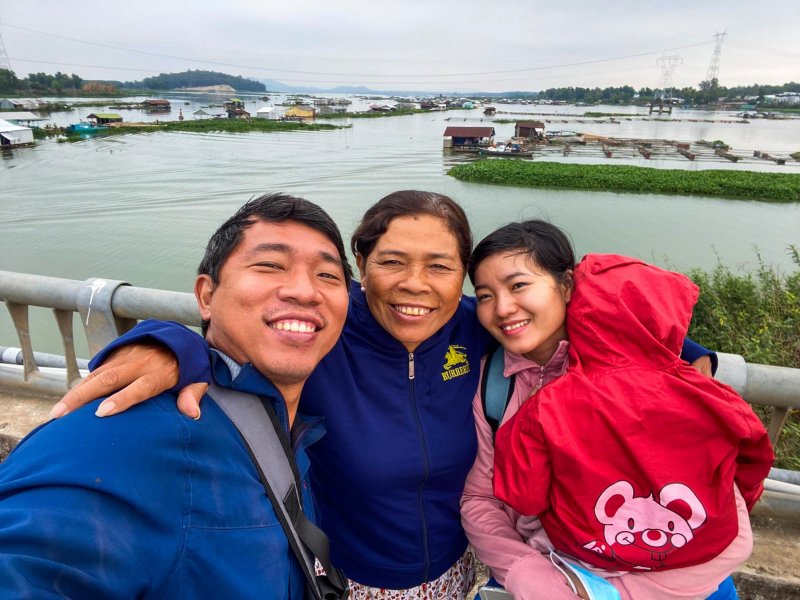 Tran Quang Dinh (left), his mother (second left), his wife and daughter stop to take a rest and pose for a photo at Tri An Lake while traveling through the southern province of Dong Nai.

The only obstacle seemed to be the scorching heat which forced them to stop for a rest at coffee shops and restaurants along the road.

“We’re in no rush, we drove when we felt good and took a rest when we were tired. We also never drove at night,” Dinh said.

Dinh’s plan for the trip was completely supported by his wife, Truc Lam, who had accompanied him on many trips around and outside Vietnam since before they were married in early 2017.

In fact, the family of three started to travel together in July 2018, when their child was four months old, with her first trip to the south-central city of Nha Trang, before the next one to the Philippines one month later.

The family then continued to visit Nam Du Island off the southern province of Kien Giang in March 2020 and some other places around Vietnam.

When the kid turned two, the wanderlust couple took her on a milestone trip of 500km by motorbike in May 2020 to see if she could handle road trips.

“My husband and I love traveling and we’ve been on the road since we first met in 2010,” Lam told Tuoi Tre News.

“After giving birth, I always stayed home to take care of my baby and now she’s grown up so we decided to let her join us.

“We want our kid to experience and learn new things."

The 28-year-old mother still remembered the excitement on her child’s face when the kid first saw some buffaloes in real life and then kept saying 'hello' to the animals along the way.

“We want her to have good childhood memories so she later can tell people how she has treasured them,” Lam said.

“First, we designed short and easy trips, and then gradually expanded the scale to see if our baby could fit to be on the road,” she elaborated, adding that she has always carried a medical kit with her.

“After each trip I can learn what I need to prepare for the next journeys." 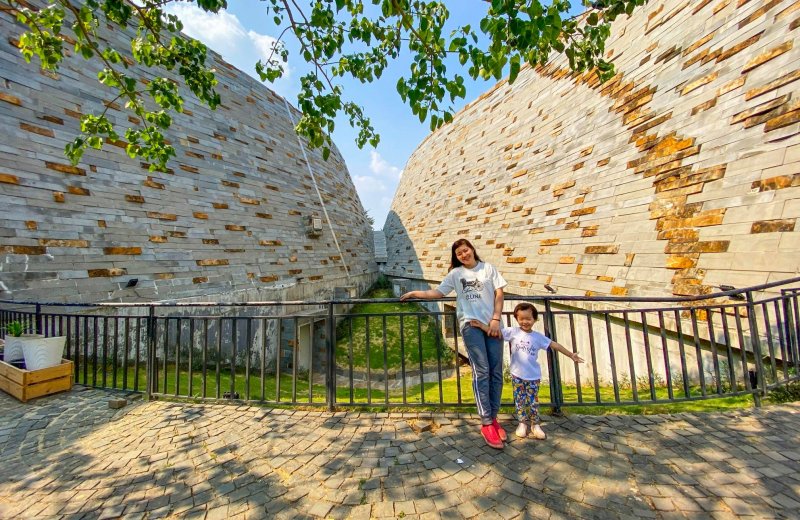 Truc Lam and her daughter pose for a photo while visiting a coffee museum in the Central Highlands province of Dak Lak.

Some people called the couple 'crazy' for taking their young kid on the road by motorbike, the mother recalled.

“I only smiled as no one understands our kid as much as we do," she explained.

"Whenever she felt tired, we stopped to take a rest without forcing her to finish our ‘goal.’

“We also covered her well with clothes under the sun.”

Grandma on the road

Dinh and Lam's recent motorbike trip was also joined by the husband’s mother, who is 63 years old now, and two middle-aged relatives of the family.

As the grandmother was not able to drive such a long way, she was on the back of the motorbike driven by a relative.

“My daughter-in-law, grandchild, and I were the most excited during the trip,” Thanh Van, Dinh’s mother, recollected.

“I did not stop my son from taking his daughter along because I wanted the kid to have a great experience as I did."

She even felt better on the road than staying at home, the woman admitted.

“It’s huge happiness to go on a trip with the whole family,” she exclaimed. 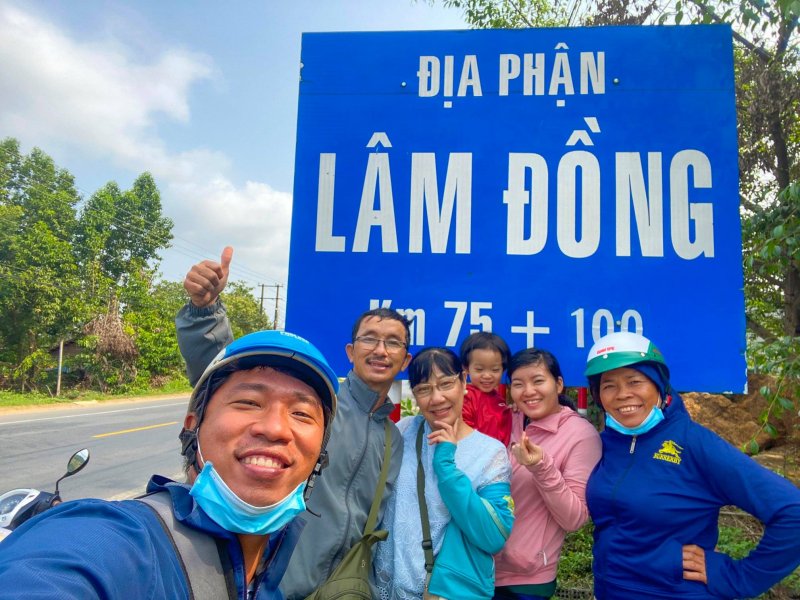 The whole crew stops to take a rest and pose for a photo when arriving in the Central Highlands province of Lam Dong.

Van added that she believed in her son’s well-organized travel plan as well as his driving skill to keep everyone safe.

She also admitted the difficulty of traveling by motorbike but it brought more valuable experiences than sitting on a tour bus watching everything through a small window.

“We could stop whenever and wherever we want to enjoy the natural landscape,” she explained.

“The more I go, the prouder I feel about my country.

"Vietnam is so beautiful and people are very friendly.

“They made me feel like home wherever I go, feel like I was still in my neighborhood talking with my neighbors.” 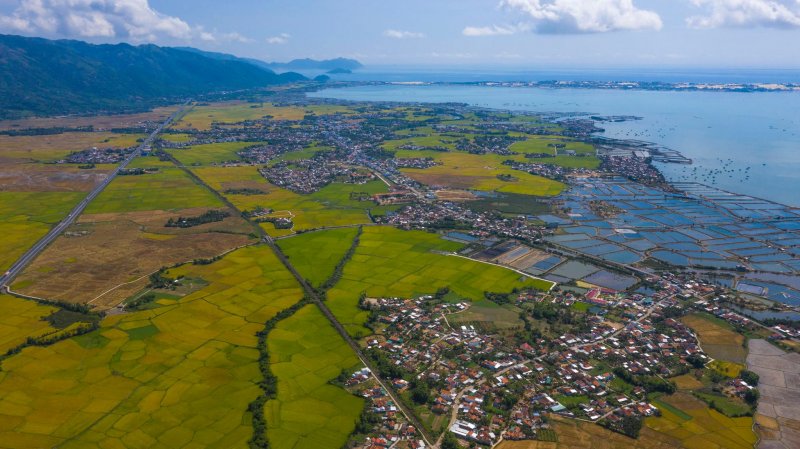 Being on the road is no longer something strange to Van, as she has traveled to lots of places in Vietnam and some other Asian countries.

This is not the first motorbike trip that she has ever joined Dinh and his wife.

Before Lam gave birth to her baby, Dinh and his wife and mother also took a road trip to explore the northern mountainous region of Vietnam.

“I simply want to create chances for my whole family to go together, and I’m working to take them on trips at least twice a year,” Dinh revealed, calling the trip though the Central Highlands and coastal central region “a precious moment” for the whole family. 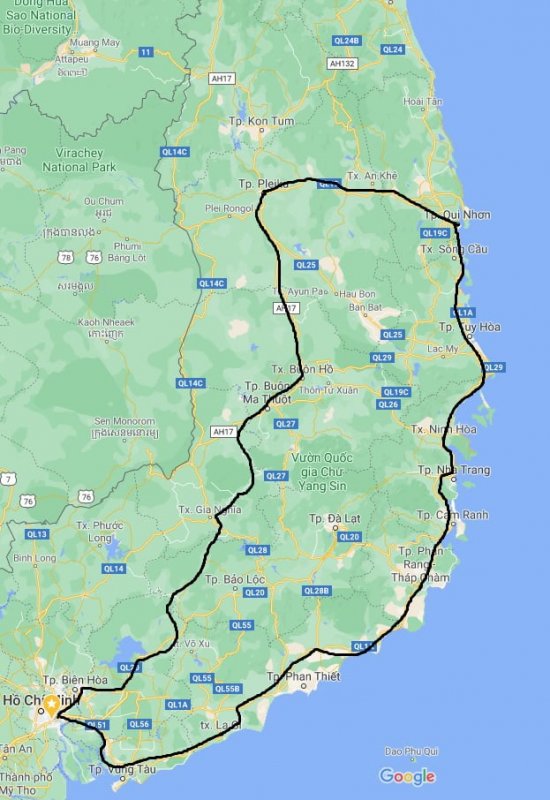