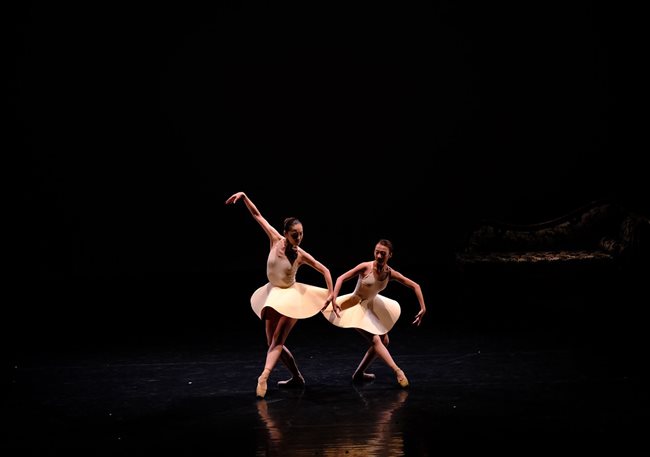 HCMC - There is absolutely no doubt that the HBSO dance performance, NeoClassic Ballet, on Saturday (April 10) was a magnificent occasion.

I half-knew what to expect, and was half unsure. This was because there were four pieces on the program, two of which were revivals of items I thought I knew well. The other two, after an interval I assumed, were premiers.

In the event there was no interval, and the four pieces were performed one after the other with usually no discernable break. But I thought I knew the first two – an assumption that proved somewhat misplaced.

The first piece, Falling Angels, had originally been very short, but what we were presented with on Saturday was barely recognizable. I was told later that it contained 40% new material, and indeed for me it was for all intents and purposes something totally new altogether.

And it was superb! The dancers had more time to develop their roles now, and the result was a Falling Angels that, I thought, had finally come into its own.

The next piece, Depaysement, seemed unchanged. I remembered its eight dancers well, plus the varying back-drops reminiscent of William Morris wallpaper and the eclectic selection of music. The dancing seemed new and fresh, however, and all in all this was a surprisingly satisfying performance.

Then, without a break, came the new pieces – My Dream, choreographed by Meritorious Artist Tran Hoang Yen, and In Your Black Eyes, choreographed (as was Falling Angels) by Nguyen Phuc Hung. As I’ve said, I was unable to discern the break between the pieces, an inability exacerbated by their both having music by the same composer, Enzio Bosso.

But what performances they were! The music had energy and drive, and the dancers picked up on this and reflected it back with additional bravura. At the end I counted 15 dancers onstage, and the sense of optimism they had displayed found its parallel in the audience’s enthusiasm.

It’s hard to pick out any individual dancers as in all four pieces they were mostly dressed alike, but I did recognize Sung A. Lung, prominent in both the first and fourth items. Generally, though, it was the ensemble dancing that left the lasting impression, making for an extremely impressive evening.

And the conclusion I came to as I walked out of the resplendent Opera House auditorium was that HBSO Ballet is going from strength to strength. Whether the items were new or old, they were given with panache and youthful exuberance (the average age of the dancers cannot have been much over their late 20s).

Considering the way in which Covid-19 has interrupted arts events on every hand, this was a tremendous achievement. Not only do we have our old pieces, the dancers were effectively saying, but we can produce new ones as well. Heart-felt congratulations are consequently due all round.