Home / Life
VIFW chairwoman awarded Knighthood of the Order of the Star of Italian
duonghanhnguyen 7-04-2021, 13:42
Chairwoman of the Vietnam International Fashion Week (VIFW), Le Thi Quynh Trang was conferred the honorific title of Knight of the Order of Star of Italy by the Italian government on April 6. 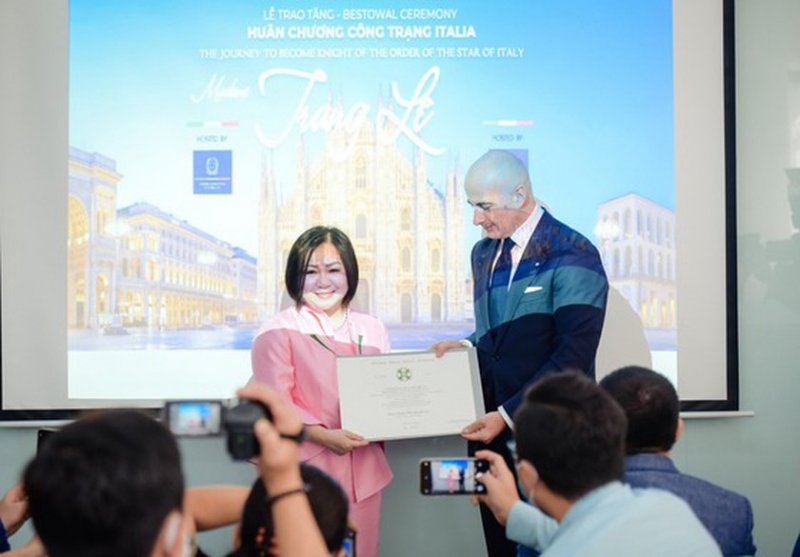 Consul General of Italy to HCMC presents the title of Knight of the Order of Star of Italy to Chairwoman of the Vietnam International Fashion Week (VIFW), Le Thi Quynh Trang. (Photo: SGGP) The award is granted by the Consul General of Italy in HCMC specifically delegated by the Italian President, aiming at honoring Ms.Trang’s outstanding contribution to the strengthening relation between Vietnam and Italia, especially in the field of fashion industry.
Last year, Trang was appointed as President of Council of ASEAN Fashion Designers (CAFD). In 2018, Vietnamese fashion designer Minh Hanh received this medal of Knight of the Order of the Star of Italy from the Italian government for her contributions to deepening ties between Vietnam and Italy and promoting Italian fashion and culture in Vietnam. The Knight of the Order of the Star of Italian Solidarity is awarded by the Foreign Minister of Italy under the Decree of the Italian President for Italians and foreign nationals residing outside Italy, who have significantly contributed to the prestige of Italy by way of promoting Italian culture and language and by way of any voluntary activity or humanitarian service that enhances the cordial relations that the Italian community enjoys in the world.