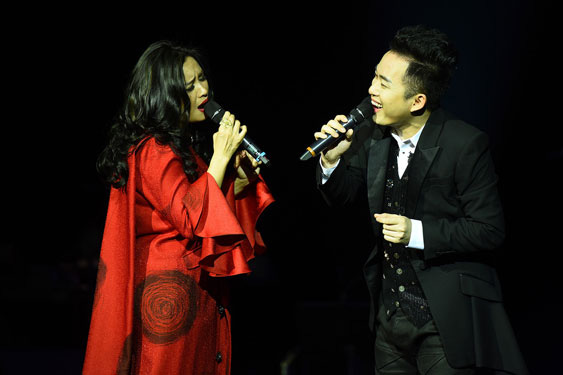 HCM CITY — The local music market is coming back to life with multiple performances scheduled for music lovers across the country in March and April.

Many music stars such as Thanh Lam, Mỹ Tam, Ha Anh Tuấn, Bằng Kiều and Mỹ Linh have released announcements about upcoming special shows and surprises for their fans.

“Hẹn Yeu” (Love date) is singer Thanh Lam’s live show, which will take place on March 21 at the Ha Noi Opera House. Thanh Lam told Người Lao Đong (Labourer) newspaper that she is craving to sing after a long time away from the stage due to the impact of the COVID-19 pandemic.

Musician Lưu Ha An, who is Hẹn Yeu's music director, said the audience will be able to experience Thanh Lam's "feelings during the most beautiful time of her life".

Unlike her previous shows, Thanh Lam will not collaborate with musician Quốc Trung this time as he has been very busy.

This perhaps will create a "different" Thanh Lam, she said.

It has been a long time since Mỹ Tam’s last show, and 10,000 tickets sold out immediately within one hour of opening for sale.

Mỹ Tam said that this was her first show with participation of other artists. She said she wanted to thank her fans for always supporting her.

Songs from the album “Tam 9” will be sung on stage, along with other big hits.

After news of Mỹ Tam’s show was published, all of Mỹ Tam’s albums topped the charts of the most downloaded albums on iTunes in Viet Nam.

Meanwhile, singer Ha Anh Tuấn has scheduled his show "The Veston Concert 2021” on April 2 and 3 in Đa Lạt City.

The programme “The Master of Symphony” with the theme “The Rising Sun” take place on three days between March 3 and March 6 in HCM City’s Hòa Bình Theatre.

The Master of Symphony has been held since 2015 and collaborations between musicians in the show have created many memorable moments.

According to experts, this show has created great inspiration for new music activities across the country and has become an annual cultural music venue loved by many music fans.

Trần Tiến is very excited about the show and will introduce new songs written recently.

One of his new songs, called Khong gục ngã (Don’t give up), will be presented in both hard rock and rock versions.

After a long break, the Vietnamese music market has finally rebooted. Producers have put a lot of effort to find sponsorships for big venues and have prepared flexible plans amid the COVID-19 pandemic. — VNS