Legend has it that the Land Genie and the Kitchen Gods ride carp and deliver yearly report on each household issues to the King of Heaven. As a result, the Vietnamese make it a tradition to celebrate the day clean up the house and prepare offerings to these gods as a farewell bidding to these Gods. However, the celebrations in the day from the North to the South in the country see some differences. Live carp to be released to river or lake near the house as a ritual to bit farewell to the Kitchen's Gods. Photo. Kinhtedothi.

For many Vietnamese, Tet (Lunar New Year) festival begins with the “Ong Cong - Ong Tao” (Land Genie and Kitchen Gods) ceremony on the 23rd of the twelfth lunar month, which falls on February 4 this year.

On that day, people also burn paper clothing, including hats, robes and boots, intended for use by the genies on the trip beyond. As the gods make their journey on the back of fish, it is traditional to release live carps into lakes or rivers, which is considered a kindhearted deed to pray for good luck.

Northern Vietnamese often worship Kitchen Gods Day from quite early as most families prepare a tray of offerings from about December 20 and the latest deadline was the mid-day of December 23 in lunar calendar, according to VNA.

The reason that not many places do worship after this period is that there is an idea that since the midday of December 23, the Kitchen Gods must go to heaven to worship the King so they no longer stayover to receive the ceremony.

The most distinctive cultural feature of the North for the other two regions is that the vast majority of families often use carp as offerings.

Depending on the locality in general and the family in particular, it can be live carp or paper carp with different quantities. 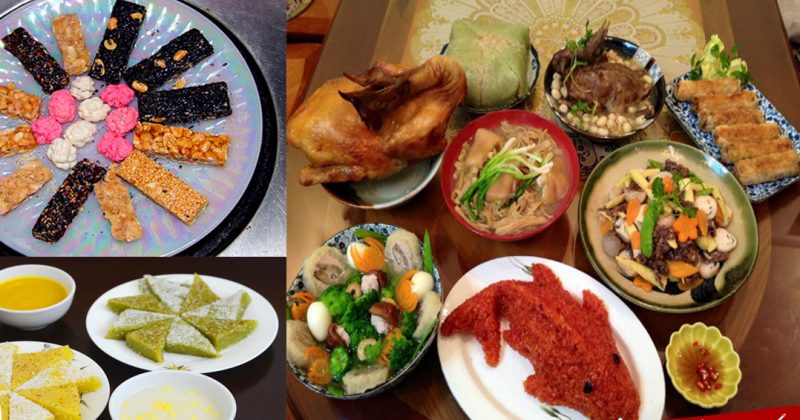 A tray of offerings in Kitchen's God Day.

The live carp is placed next to the offering tray. After the ceremony is finished, it is released in ponds, lakes, rivers, and streams near the house with the meaning of dragon carp, as a means of bringing the Apples back to heaven.

In addition, the release of carp on this day also shows the kindness, virtue and kindness of the owner.

In addition, it is indispensable in Northern’s tray of offering without joss paper and votive boots and hats and traditional dishes such as sticky rice, boiled chicken, spring rolls, sweet soups or sticky rice and tea if the worshipper is a vegetarian.

The ritual of worshiping the Kitchen Gods of the Central people is often said to be the most elaborate of the three regions.

Unlike the North’s offerings of votive papers or joss hats and shoes, the Central people often burn paper horses with a saddle, votive papers, and many other items to the Gods.

The first thing that the Central people did in the ritual of worshiping the Gods was to renew the inside of the censer and clean the altar and prepare properly for the ceremony to take place on December 23 of lunar date.

After the worshiping is completed, the homeowner will proceed to see off terracottas of three Kitchen’s God statues from the altar and take it to the temples at the top of the village or under the old trees at the crossroads. After bidding farewell to the old statues, they place new ones on their altars to welcome the new year.

People in Hue city also have the erect a neu pole in front of their house or in yards of communal houses on the morning of Kitchen Gods’ Day to shoo away the evils and bad lucks.

According to the customs of the Southern people in the past, there are many different things from the way of worshiping today. Families often worship the Kitchen Gods at night, between 8 p.m. and 23 p.m. on December 23 in the lunar calendar.

Because of the conception that Kitchen Gods would only perform at the end of the day when the whole family has finished dinner and does not have to use the kitchen for cooking in order to avoid disturbing the Gods.

However, due to the cultural interference, the time of worshiping and the offering tray of the Southerners have changed more or less.

Every family holds a ceremony to see off Kitchen Gods from early morning in the cooking area, with a tray of offerings with some indispensable things such as bowls of sweet soups, a plate of candies made from black sesame and peanuts, incense sticks, three small cups of water and especially votive papers resembling "flying stork and running horse.”

In addition, the homeowner also bought three new paper clothes for three Kitchen Gods. Southern’s tray of offerings is said to be the simplest among the three regions.