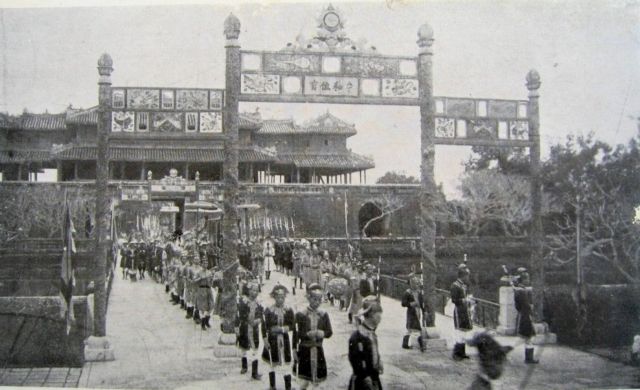 A photo from Imperial Archives of Nguyễn Dynasty is shown at the exhibition at Văn Miếu Quốc Tử Giam.

HÀ NỘI — A photo exhibition featuring Lunar New Year during the Nguyễn Dynasty (1802-1945) is being held at Văn Miếu Quốc Tử Giam (The Temple of Literature).

The exhibition Cung Đình Đón Tết (Tết in The Palace) shows about 80 photos and documents about the royal celebration of Lunar New Year.

The items are selected from the Imperial Archives of the Nguyễn Dynasty, which were recognised by UNESCO in 2017 as a Memory of the World.

"Through the documents and photos, people will get to know about the Lunar New Year during the Nguyễn Dynasty and the connection inside and outside the royal palace on this occasion," said Đặng Thanh Tung, head of National Archives Centre 1, at the opening ceremony.

"The exhibition organisers hope to promote the valuable documents and cultural heritage."

Exhibits on display contribute to introducing Lunar New Year celebrations during the Nguyễn Dynasty, which are very different from the contemporary festival.

The organising panel hopes that these valuable documents are useful to researchers and people interested in the field.

The exhibition is meaningful to remind people about old customs and ritual ceremonies for the Lunar New Year at the royal palace, according to chief representative of the UNESCO Office in Viet Nam Michael Croft.

"Modern society is changing a lot," he said. "Many customs are gradually being forgotten, so Tết is an opportunity for us to look back."

Tết ceremonies in the royal palace are solemn and quite different from normal, but both royal and normal people honour duty and moral values, according to Doctor Đỗ Văn Trụ, Chairman of Viet Nam's Heritage Association.

The month-long exhibition is held jointly by National Archives Centre 1 under the State Records Management and Archives Department and the Centre of Science and Culture Activities of Văn Miếu - Quốc Tử Giam.