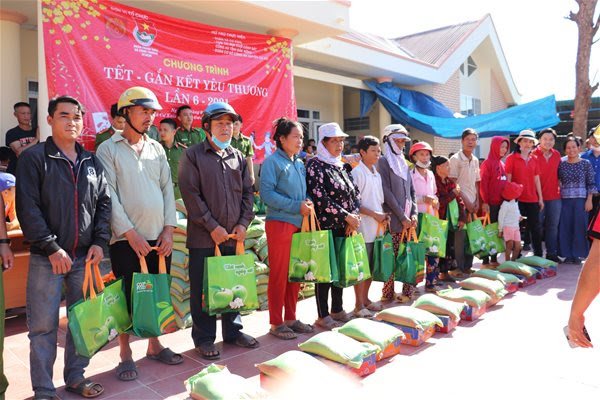 HCMC – The Youth Union of the HCMC Department of Industry and Trade on January 23 introduced the “Tet-Connecting Love” program to present hundreds of gift sets to the disadvantaged households and students of Cu Knia Commune in Dak Nong Province’s Cu Jut District aimed at sharing the difficulties with the poor of the Central Highlands province and helping them prepare for Tet.

The youth union offered 300 gift sets, including rice, instant noodles and necessities to the disadvantaged households in the commune, while 600 other gift sets containing notebooks, milk and stationery were donated to the poor children.

Duong Dinh Tam, a representative of the Youth Union of the Dak Nong police, said that the program was meaningful to the poor. Besides this, it also contributed to bringing out the best in the youth due to their social initiative.

Through the program, the Youth Union of the municipal Department of Industry and Trade expects to receive more donations from philanthropists and charity organizations across the country to continue showering love on the poor.