Home / Life
Ambitious female photographer with a desire to show Vietnam to the world
duonghanhnguyen 20-01-2021, 11:11 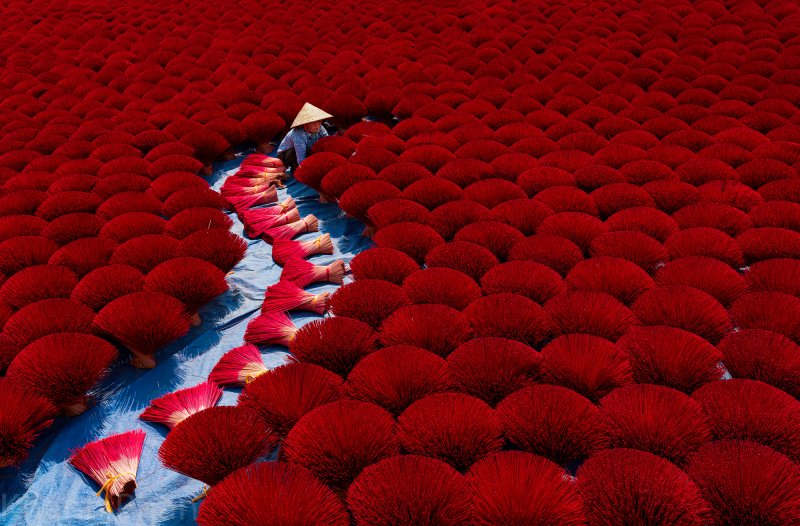 A Vietnamese female photographer has recently attracted attention to the beauty of her motherland through her acclaimed photos. 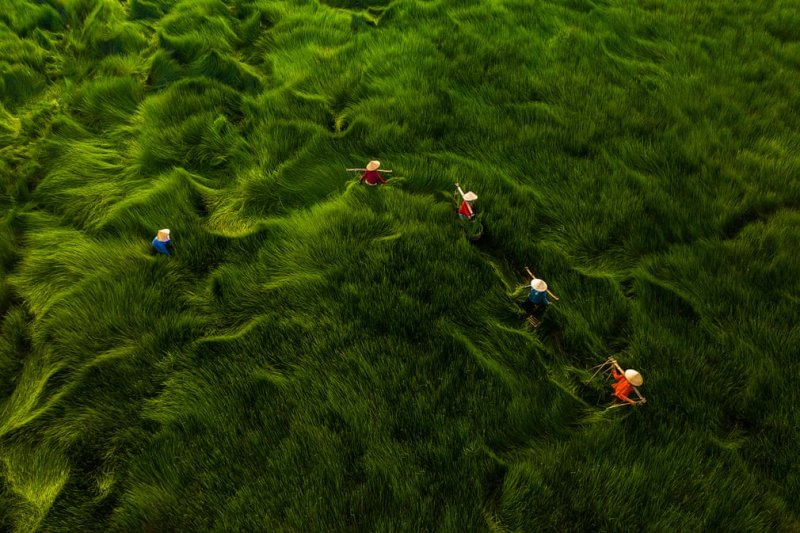 Phan was also the only female photographer among seven outstanding participating photographers from across the world who were featured in the contest’s interviews, she shared.

Talking about her award-winning photo with Tuoi Tre News, Phan called it “a perfect harmony between man and nature with the light of the new day, the wind, and the details of the grass.”

The 'Harvesting Grass' winning photo comes from Phan’s well-known namesake series, which has captured attention on social networks since around mid-2020.

The photographer did not hesitate to call the series the favorite artworks of her career, as it has been mentioned by people in different countries.

“It made overseas Vietnamese know about me and they bought my photos to ease their homesickness,” she said.

“They were proud to see a Vietnamese female photographer mentioned in international media and proud of their motherland.

“I was deeply touched." Her works were also featured in UK media including The Times, The Guardian, The Telegraph, Daily Mail, and Wanderlust.

“I have a burning desire to bring the images of our country and its landscapes as well as people closer to the world, and the fastest way to make my dream come true is through photo contests,” Phan revealed her motivation.

“I’ve looked for and sent my entries to prestigious world contests, then luckily won some awards."

The 36-year-old photographer has also been praised at many Vietnamese photography awards.

'I love my beautiful Vietnam'

As Phan has never attended a professional photography school, she started to shoot in 2017 by learning from friends.

The woman who is working in the banking industry spent time self-studying on the Internet and learning from works by globally famous photographers.

“I photograph out of my passion,” she said. 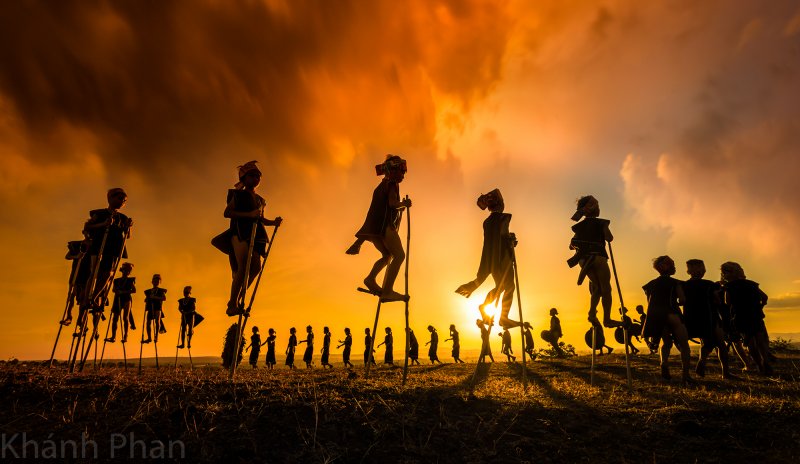 ‘Children Dancing with Gongs,’ a photo capturing children dancing with gongs at a festival in Vietnam's Gia Lai Province, which was listed among the world's best photos of golden hours in 2020 by Agora. Photo: Khanh Phan

Explaining the motivations behind her photos depicting stunning Vietnam, Phan called out her love for beautiful things.

“Above that is my love for my country,” she said.

“I love my beautiful Vietnam.”

Talking about her favorite topics in photography, Phan shared she has a special interest in craft villages.

“Vietnam is a rich country when it comes to culture and heritage values passed down from our ancestors,” Phan told Tuoi Tre News.

“Craft villages are a precious material for photography and most of my winning photos at international contests were ones depicting this topic."

As a child born to a farming family, Phan grew up seeing her parents working hard from dusk till dawn.

That childhood memory has motivated Phan to take photos of hard-working people to “display their photos in museums and big galleries.”

“I photograph to pay tribute to those people and honor this life,” Phan said.

“To me, the most beautiful person is the person who works, as working creates life values and happiness.” 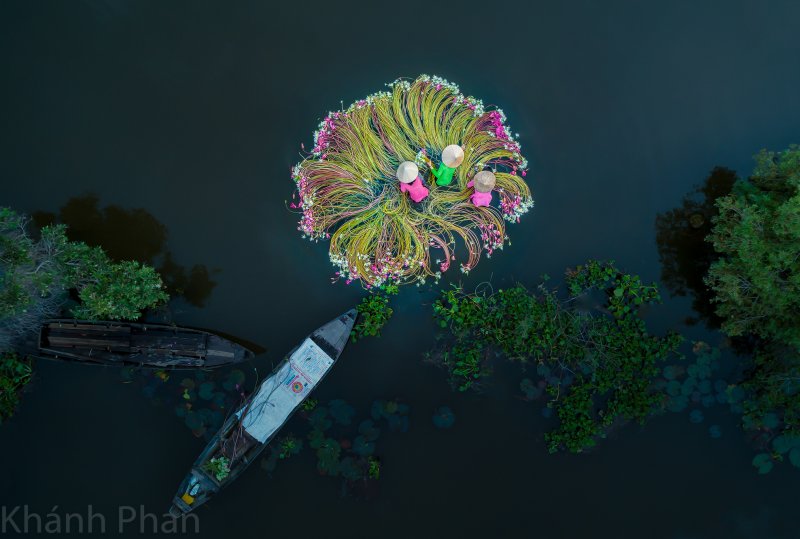 Khanh Phan's ‘Flower on the Water,' a photo capturing people harvesting water lilies in the southern province of Long An, which won the Fun category of the 2018 SkyPixel Aerial Photography & Video Contest and the People category of the 2019 Siena drone photography awards.

Phan shared that she often spends time and efforts getting to know about a place as well as its nature and people before coming for shooting.

“It is not too hard to have a good photo but I want more than that,” she said.

“I need to deliver good stories and the local cultural beauty of Vietnam’s regions through my pictures.”

Phan added that she wanted to attract viewers by the eye-catching colors of her pictures to encourage them to get to know more about the stories behind them, for “Vietnam is an interesting country.”

Phan also believed that “life is always fair to people who never stop making effort” like her.

Calling herself lucky for being supported by friends and seniors in the local photography industry, Phan admitted the hardship of the passion she has pursued.

“But I’m happy because I have been able to do something which proves that women can achieve big dreams,” she insisted.

“As a woman, I love this life in my own way,” Phan expressed her thought in an interview on the 2020 Aerial Photography Awards’ website.

Below are photos Khanh Phan captured across her beautiful Vietnam: 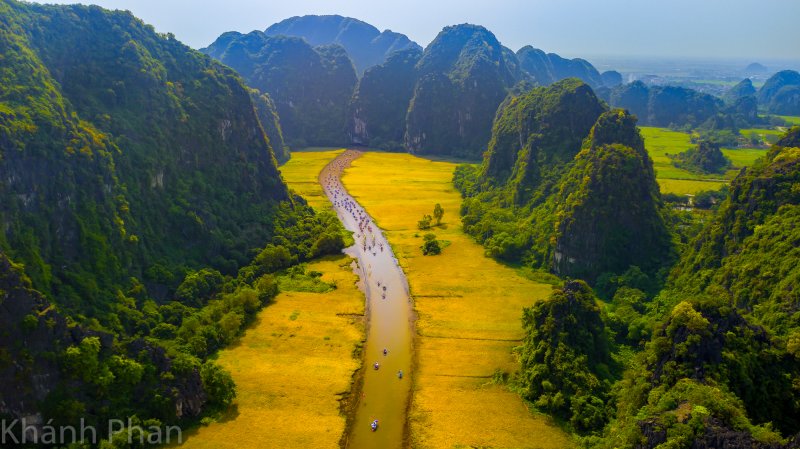 The Tam Coc tourism site is seen in this photo taken in the northern province of Ninh Binh. 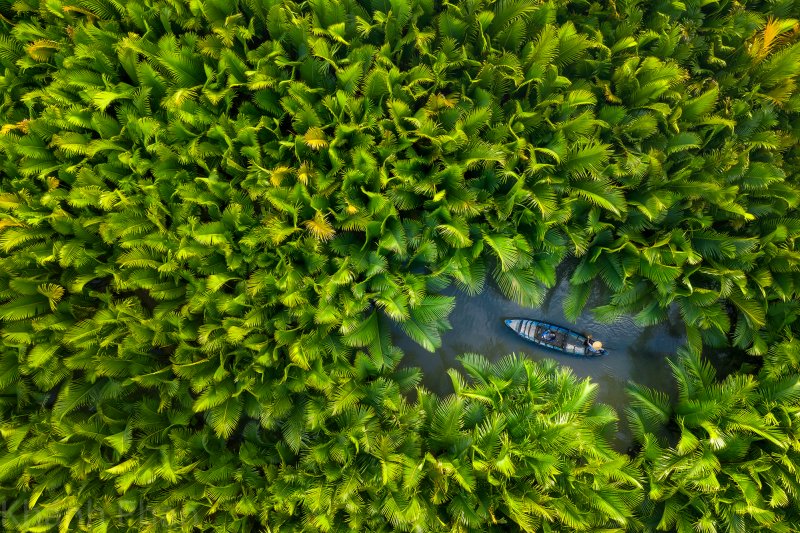 A photo shows people fishing in a coconut forest in the central province of Quang Ngai. 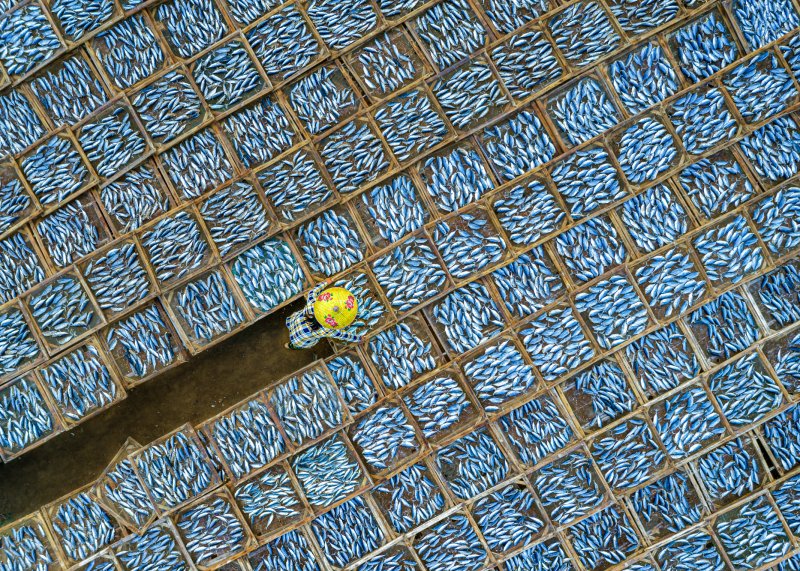 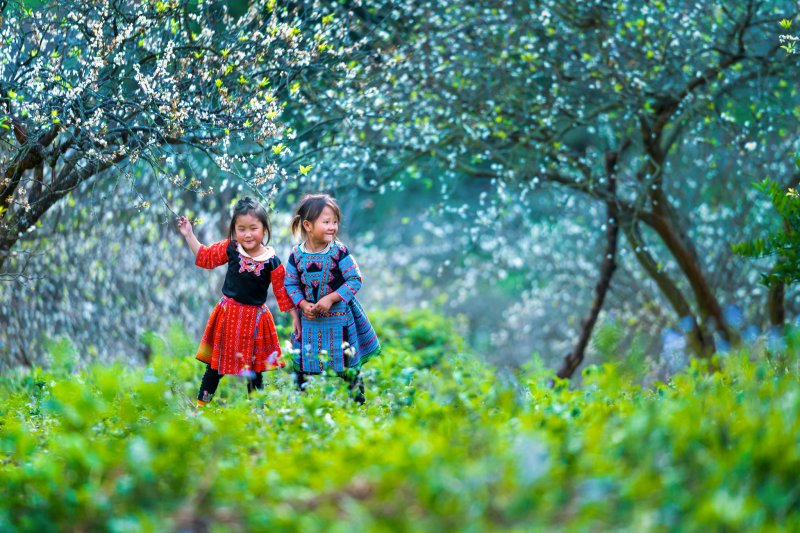 Children play under blooming flowers in the northern mountainous region of Vietnam. 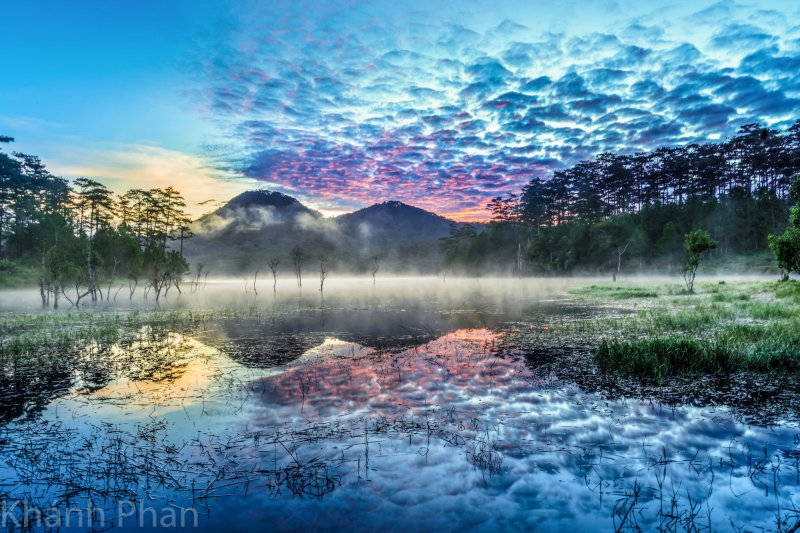 A photo captures dawn on Tuyen Lam Lake in the Central Highlands city of Da Lat. 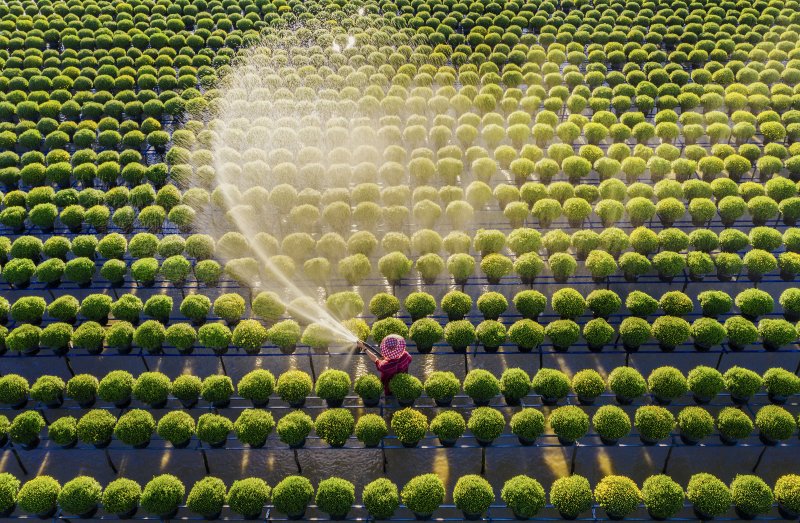 A farmer is watering flowers in Sa Dec Flower Village in the Mekong Delta province of Dong Thap. 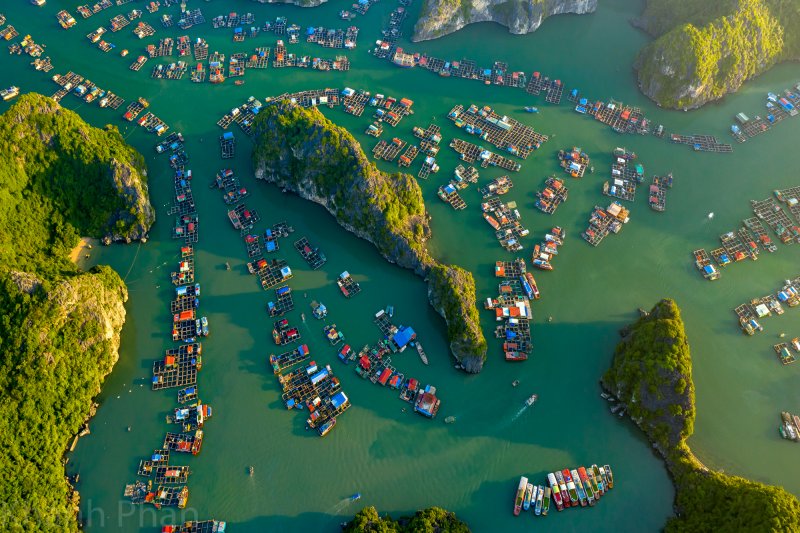 A photo shows Ta Pa paddy rice fields in the Mekong Delta province of An Giang. 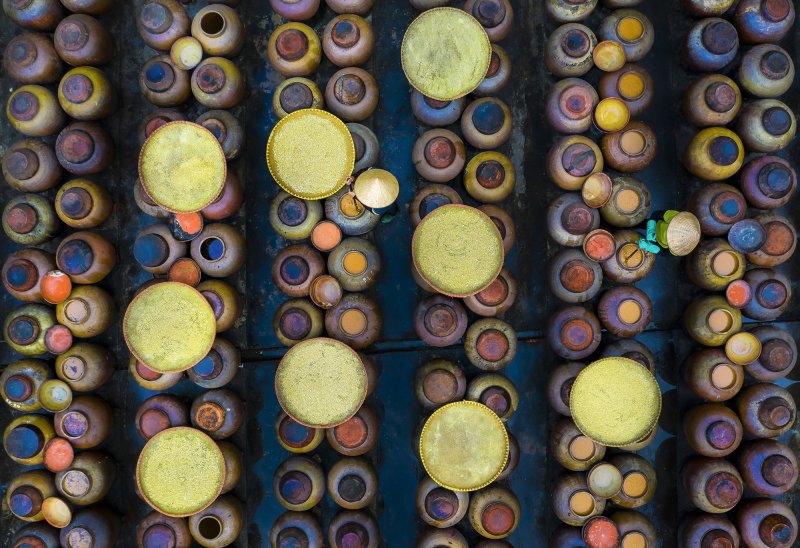 People are seen making soy sauce in this photo. 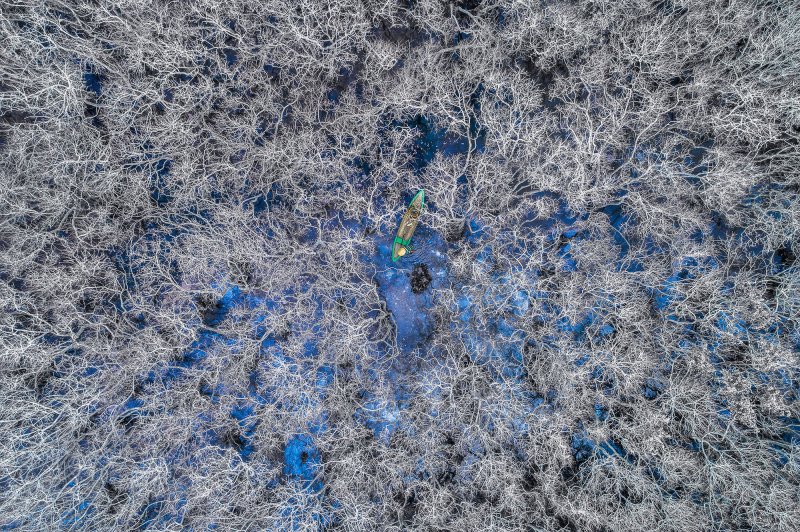 The Ru Cha mangrove forest in the central province of Thua Thien-Hue. 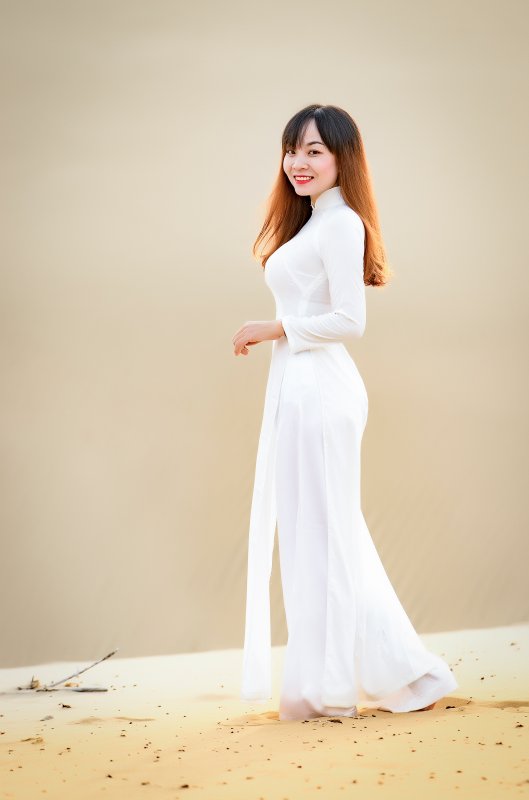