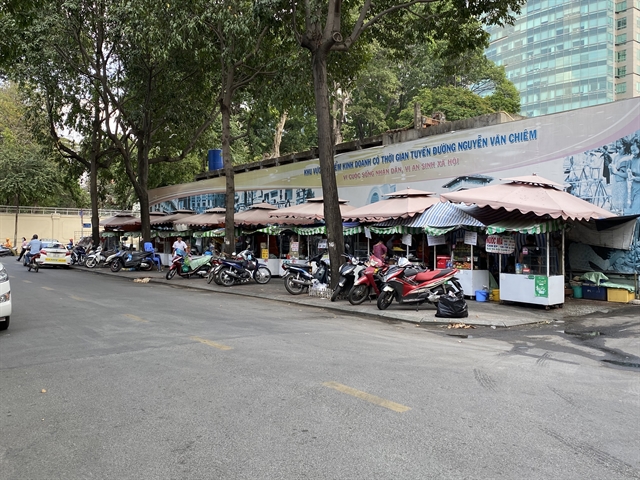 The pavement along Nguyễn Văn Chiem Street has been designated for street food vendors. VNS Photo An Phương

HCM CITY — Several districts in HCM City have reserved some streets for local vendors to set up their food stalls, and at the same time, ensure food safety and hygiene in the area.

Many food stalls can be found along Nguyễn Văn Chiem Street and Bach Tung Diep Park in District 1 and Le Bình Street in Tan Bình District.

Compared to years ago, pavement encroachment and littering along sidewalks no longer occurs in these areas.

Authorities have provided 15 households in Bach Tung Diep Park with wooden furniture, canopies and vending cars free of charge. As the park is located nearby Nam Kỳ Khởi Nghĩa Street and People’s Court of HCM City, the number of visitors is fairly high.

Meanwhile, on Nguyễn Văn Chiem Street, about 20 households in the street-food business have been divided into two shifts, from 6am to 10am and from 10am to 15pm.

Most businesses have been operating well, according to Sai Gòn Giải Phóng (Liberated SaI Gòn) newspaper.

Similar cases can be seen on the pavement along Le Bình Street where the People’s Committee of Ward 4 in Tan Bình District has arranged a roof to make it easy for locals to do business.

Authorities also sent the vendors to participate in a course on food safety and hygiene.

Many street-food business owners here once received penalties for encroachment of roadways and sidewalks.

According to the People’s Committee of Bến Nghe Ward in District 1, street vendors operating on Nguyễn Văn Chiem Street and in Bach Tung Diep Park have seen their life quality generally improve.

This has contributed to a reduction in the poor and near-poor household rate in the area, while controlling food safety and hygiene.

Many experts said that replication of this model in HCM City is necessary to ensure the welfare of locals and tidy roadways. However, there should be a standardised way to expand the plan.

Vice chairman of the People’s Committee of Ward 4 in Tan Bình District Nguyễn Như Hung said that authorities could not just simply ask vendors to cease operations and seize their vehicles.

For the plan to work out, allocating a sufficient amount of land at busy areas to ensure traffic is a crucial factor. Street vendors are also advised to attend training on food safety and hygiene and not sell similar products.

“It would be great if each district has a spot to for street vendors to settle their businesses. But it is worth mentioning that these should be areas with dense population, parking spaces and convenient electricity and water systems,”  Bui Đuc Lợi, a street vendor on Nguyễn Văn Chiem Street, said.

The People’s Committee of Bến Nghe Ward said that District 1 would continue to support poor households to run their businesses without affecting the urban landscape.

“I really appreciate the launch of these food streets as I can save time finding where to eat. Everything my colleagues and I want for lunch is probably here,” Ngọc Trần, a officer in the area, told Viet Nam News.

“I love street food and actually Viet Nam is known to have some of the best street food in the world. We should appreciate street vendors but organise them in a way that does not cause chaotic scenes in the urban landscape,” she added.

Considering all the benefits that the model offers in helping locals escape poverty, ensuring food safety, and maintaining clean and tidy urban landscapes, it is crucial for HCM City to replicate the model on a larger scale.  VNS