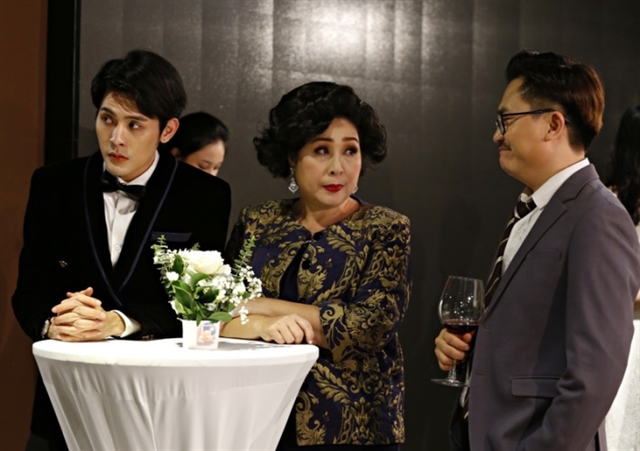 People’s Artist, theatre actress and director Hồng Van perfoms in Mẹ Mẹ Con Con (The Game of Love), a web drama series featuring love and family issues. The work will be on YouTube on December 17. (Photo courtesy of the producer)

HCM CITY— A web drama series on love and family issues starring famous actors including comedians in HCM City will be released on YouTube next week.

The show, Mẹ Mẹ Con Con (The Game of Love), focuses on the features of a wealthy family.

Its story is a long journey of reparation as the mother of young businessman Nhan tries to make things right with her only son. The tumultuous relationship between mother and son, siblings banding together through trials and tribulations, and children never giving up on their parents, are highlighted.

Van performs with young artists such as Võ Đăng Khoa, Khả Như and Kha Ly, graduates of leading art schools such as the HCM City University of Theatre & Cinematography.

“My young colleagues helped developed my career in a new and very different way from my path. I wanted to try a new form by using YouTube to expand my art among young people,” Van, who is also a theatre director and producer, said during the film’s launching ceremony in HCM City.

“I believe releasing web dramas on YouTube is a good way to save money on production and province audiences with art.”

Van began filming after the second part of her first web drama, Đại Ke Chạy Đi (Run Run, Đại Ke), was released on YouTube in July. The work revolves around the daily life of a sick mother, a chicken seller, and her adopted son named Đại Ke.

The film’s first part, released in April, earned more than 25 million views for six episodes, while the second part of nine episodes has attracted 245,741 views.

“Our film, Mẹ Mẹ Con Con, highlights traditional values in the family in urban life. We decided to launch the film before the Tết (Lunar New Year) holiday because we hope young audiences will think about their family after watching,” said Van, who has been in the industry for 30 years. “We have worked hard to make each episode a lesson with images, sounds and music that provides audiences with ideas about their traditional culture and lifestyle,” the 54-year-old said.

The first episode of Mẹ Mẹ Con Con, directed by Quốc Thuận, will be released on YouTube on January 17.—