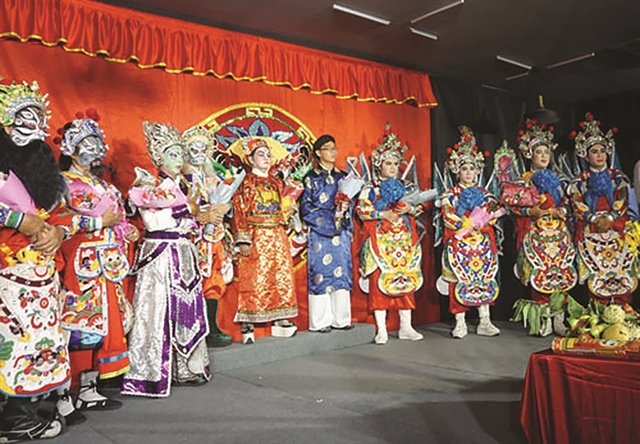 Young and veteran artists from the art programme Vang Vọng Trống Chầu are helping to preserve and develop tuồng, a traditional genre of Vietnamese theatre which began in the 17th century. Photo courtesy of tHCM City Hat Boi Theatre

HCM CITY A new art programme offering tuồng, or hat boi (classical drama) performances has been launched by a group of artists in HCM City as part of their efforts to introduce Vietnamese culture and theatre to young people.

Veteran artists such as Hữu Lập and Ngọc Khanh perform with their younger colleagues who are students of the HCM City Hat Boi Theatre, one of the region’s leading traditional theatres.

Each 60-minute show of Vang Vọng Trống Chầu includes talks about tuồng’s history and development during various periods. Dozens of musical instruments and costumes used in tuồng are exhibited after the show.

“Our programme aims to expand tuồng, a traditional art developed from folk art into a royal art in the 17th century, among young people. We hope audiences will learn about the country’s history, culture and lifestyle through our performances,” said the programme’s head Phan Khắc Huy.

Huy said that he and his staff had worked hard because they wanted to “honour tuồng and its artists who have used their art to keep traditional Vietnamese theatre alive”.

“We hope our tuồng shows will attract local and foreign visitors who want to learn about Viet Nam’s culture and theatre,” said Huy, who has 10 years of experience in tuồng.

Tuồng consists of singing and dancing accompanied by music, and is highly stylised and filled with symbolism. Its themes include monarchist loyalty and patriotism which help define the play’s structure, language, music, struggles, and characters’ personalities.

Performers wear heavy costumes weighing up to 10 kilos. They use their body, from the fingers to the elbows to all of the muscles, to move on stage. They must have a strong voice to sing and dance at the same time, and express the emotions of the characters.

Today, 09:49
Nationwide automobile Kia Morning, a rival of VinFast Fadil and Hyundai i10 has simply opened on the market, with a stunning value discount

Today, 09:42
How to Take Care of Your Finances When Playing Online Casino Games

Today, 09:30
Hello India! Now's the Perfect Chance to Re-experience the Wonders of Indonesia