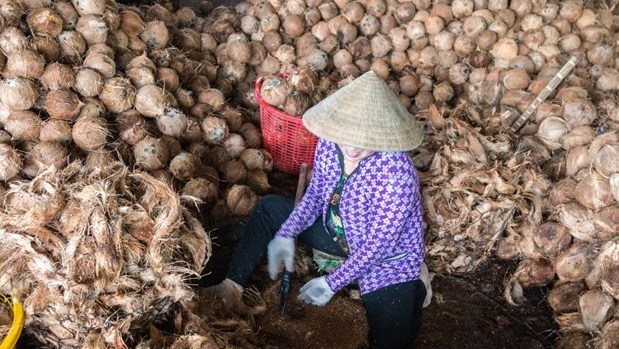 During a recent meeting with the representative of the Vietnam Trade Office in Belgium, Eric Franssen, the trade and development director at John Cockerill, said that Vietnam has many advantages in renewable energy, producing biomass heat from industrial waste. John Cockerill can assist Vietnam in converting biomass energy, which can provide the same amount of heat as coal. In addition, the Group can also produce renewable energy by separating hydrogen from water through electrolysis to power vehicles and transport.

Pierre Lambotte - Head of Business and Development Department of John Cockerill, commented that Vietnam is a developed agricultural country, especially with the Mekong River Delta region seen as a “granary of rice” and “coconut land”. Coconut shells and coir will be an abundant source of raw materials for the production of activated carbon for export.

Therefore, John Cockerill wants to transfer advanced technology to Vietnam to treat coconut waste as well as post-harvest straw into a source of biomass fuel and then convert it into biogas and biofuel - liquid fuels that can be used to replace fossil fuels in transportation. This technology is especially important in the context of the United Nations calling on countries around the world to take action to achieve the goal of being carbon neutral by 2050.

The development of biomass energy from coconut coir and shells also allows the creation of many sustainable jobs.

The Vietnam Trade Office in Belgium will widely inform associations, localities and businesses that are engaged in exporting, especially the coconut industry, wood chip industry and units involved in the production of activated carbon, on accessing the advanced technology of John Cockerill Group. In particular, the Group has an innovation fund that will support Vietnamese businesses in the process of transferring activated carbon production technology.

Today, 11:36
DEKRA Positioned for the Future Thanks to Focus on Safety, Security and Sustainability