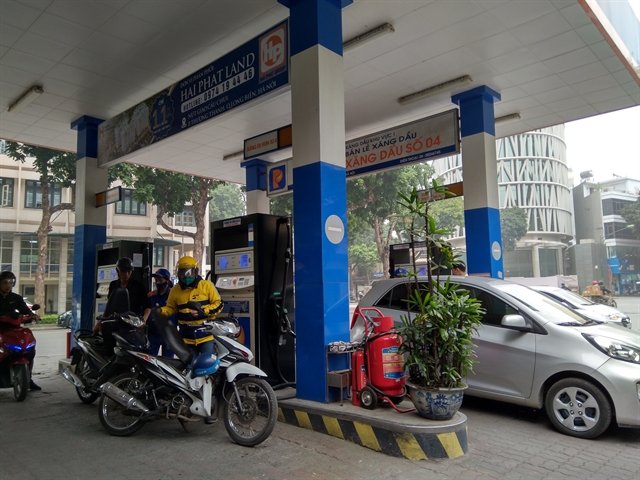 According to Global Petrol Prices, there are still 29 countries and territories with lower gasoline prices than Vietnam. On the morning of October 22, at the session to discuss the socio-economic situation, the management of the petroleum market was interested by the National Assembly deputies. In it, Minister of Industry and Trade Nguyen Hong Dien said: “Our gasoline prices are the lowest in the region and can be said to be the lowest in the world. Except for Malaysia’s domestic subsidies, we don’t say, and foreigners living in Malaysia still have to buy the price of the region, which is higher than our average price.”

However, according to data from Global Petrol Prices, the country with the cheapest gasoline in the world is Venezuela, with only $ 0.016 / liter (nearly 400 VND / liter).

In Southeast Asia, two countries with lower gasoline prices in Vietnam are Malaysia and Indonesia, with prices of $0.435/liter respectively (more than 10,000 VND/liter) and 0.918 USD/liter (more than 21,500 VND/liter/liter). In particular, Malaysia has the 9th lowest gasoline price in the world.

Vietnam’s gasoline price in the Global Petrol Prices statistics table is $0.932/liter (about more than VND23,100/liter), ranking 30th among the economies with the lowest gasoline prices in the world.

In addition, there are also dozens of other countries where gasoline prices are twice as expensive as Vietnam’s and are among the most expensive in the world.

However, in terms of per capita income, these countries also have a per capita income 10-20 times higher than Vietnam, such as the UK, Germany, Singapore, the Netherlands, Switzerland, Sweden, and Belgium. This shows that the ratio of price to income does not necessarily represent a higher price level than Vietnam. 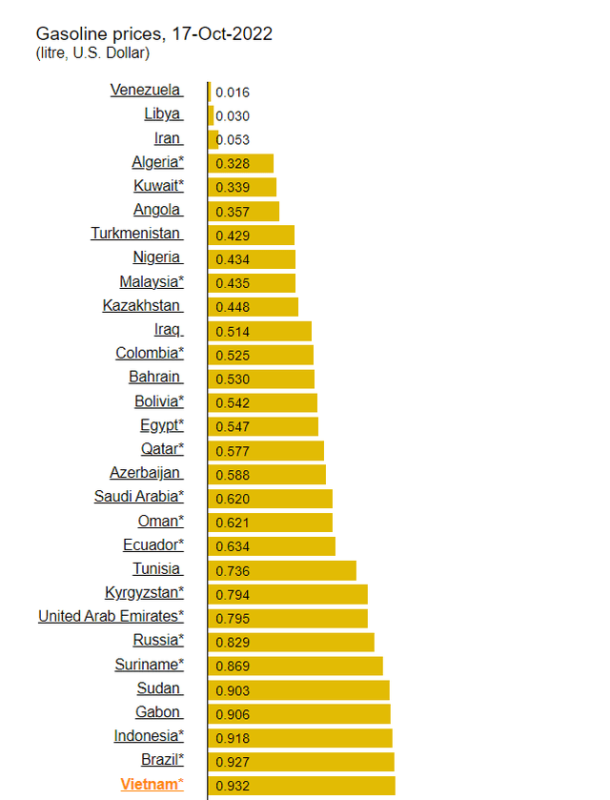 The current problem of Vietnam is the situation of ensuring the supply of petroleum. According to the Minister of Industry and Trade, there are about 3 million m3 of petroleum in the end of September, mid-October. With this reserve, Mr. Dien affirmed, it will completely meet the domestic supply until the end of November. In November, enterprises continued to produce and import.

“There is no shortage of supply, but selling to the market is difficult. This difficulty is across the country. Enterprises have to buy at high prices, enter high prices in the previous period, sell at low prices in the period, then they will lose, but if they lose, who dares to do it,” the Minister said.

Why is petrol in Malaysia so cheap?

Not only gasoline, but most fuels made from crude oil in Malaysia are also cheap, as are most of the oil-exporting countries (OPEC).

Malaysia has large (including undiscovered) oil reserves and oil fields off the South China Sea, on the coast, peninsula and east of Malaysia, where Brunei is located.

The government tightly controls the oil industry through the state oil company Petronas. Oil exploration and drilling is carried out through joint partnerships with state-owned companies and foreign oil and gas companies.

The government makes money through exports of high-quality low-sulfur crude oil due to the country’s lack of sufficient refining capacity and imports of lower-grade fuels for domestic consumption.

Fuel prices are subsidized by the government, although the amount varies over time depending on who is running the country and political influence, especially right before an election. Fuel products are strictly controlled and tax-free.

Reuters news agency said that in 2021, the Malaysian Government has pumped the budget to subsidize fuel, LPG and cooking oil to 8 billion ringgit, more than 42 trillion dong.

This subsidy has helped the country’s Ron 95 gasoline maintain an average price of 2.5 Ringgit/liter, equivalent to VND 13,216 in 2021.

In the future, gasoline prices in Malaysia could be even cheaper as Petronas is currently building a large concentrated refinery in the southern part of the peninsula, next to Singapore, and is nearing completion. It is currently in a test run in preparation for official operation. The location was chosen close to Singapore for easier transportation of products in or out.

Today, 01:42
Plants that once grew wild were brought back to be planted, and seeds sold for hundreds of millions of dong/kg

Today, 00:09
Unexpectedly bee venomous species are a specialty priced at $20 / kg, and people are extremely passionate about it