Since the beginning of 2022, Bitcoin has fallen from $68,000 to $34,000, dragging almost the entire crypto market down with it. However, Fantom (FTM) is an exception as the Total Locked Value (TVL) keeps growing, outperforming the Binance Smart Chain Terra.

Here are the reasons for Fantom’s rapid growth and the problems that can cause it to fall.

Fantom is an EVM-compatible, Layer 1, easily scalable, fast, high-throughput public chain launched in December 2019. It is the first public chain to support Lachesis, an aBFT (Asynchronous Byzantine Fault Tolerance) consensus algorithm based on DAG (Acyclic Directed Graph). Chain has outstanding properties such as:

Fantom has implemented 135 protocols including DEX, Profit Farming, Lending, Assets, Staking, Minting and Derivatives. It is the 5th largest public chain in terms of number of protocols after Polygon and Avalanche.

However, Fantom’s TVL is much larger than Polygon’s or Avalanche’s, showing a promising ecosystem with plenty of room for growth.

In August, Fantom announced it would invest 370 million FTM to boost on-chain growth.

Fantom has closed 5 strategic funding rounds and raised over $100M in investments from top VCs such as Alameda Research.

Fantom’s TVL has reached 18.87 billion, surpassing Terra and Binance and being the second largest public chain in this regard. The largest contributor to TVL is bridge projects (at 34.32%), followed by profitable projects (23.83%). In terms of specific protocols, Multichain (formerly AnySwap) is ahead of the rest. 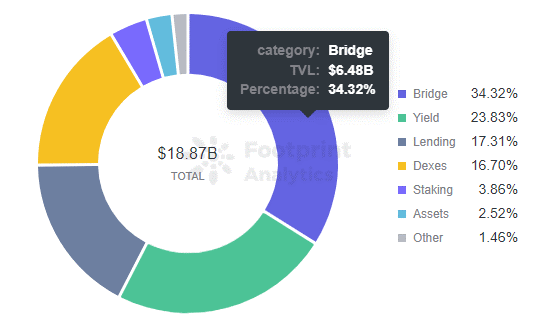 Phase 1: From September 21 to October 11, the company surged 856.5% to $10.24 billion, overtaking Tron, Avalanche, Terra and becoming the fourth-largest public chain after Ethereum, BSC, and Solana.

As the reason for the rapid growth during this phase, AnySwap and Geist Finance were the main catalysts that helped Fantom explode. AnyAwap contributed 43% TVL to Fantom thanks to increasing demand for bridges in public chainfighting. Geist Finance staking has attracted significant capital at 14,580% APY, which is 34% TVL.

Additionally, Andre Cronje announced the migration of Yearn Finance to Fantom, thereby instilling the confidence of players to participate in Fantom’s DeFi project.

The reason for the rapid growth during this period was the influence of Cronje.

On January 1st, Andre Cronje (founder of Yearn.finance) announced that he would release a new protocol on Fantom and then transfer their tokens to the top 20 on-chain TVL DeFi protocols. The major DeFi protocols frantically started accumulating locked TVLs. Specifically 0xDAO, which uses a vampire attack to lock TVL. Accordingly, TVL skyrocketed on Fantom, surpassing Terra to become the second largest public chain.

However, Fantom’s rapid growth came to a head when the airdrop ended on January 25th.

Relying too much on celebrity influence

Fantom has grown incredibly over the past few months. However, it is almost entirely powered by Cronje. This makes the platform vulnerable to weaknesses should he “steer away” from the protocol.

Also, despite good work, there aren’t many new projects on Fantom. Every project ecosystem needs a constant stream of new projects to keep growing.

Solana has 1,000 validator nodes and Terra has 100. Meanwhile, Fantom has only 50, relatively few in the best mature public chain. This makes the chain relatively low overall, guideless and unreliable. This means that decentralization is not high enough to attract DeFi protocols, affecting TVL. Because of this, Fantom needs more validator nodes.

In short, if Fantom wants to rank second, even at the top of the public chain, the above problems must be satisfactorily resolved.