Home / Finance
A statue of the unknown founder of Bitcoin was unveiled in Hungary to honor blockchain and cryptocurrency
doyen1988 19-09-2021, 15:54 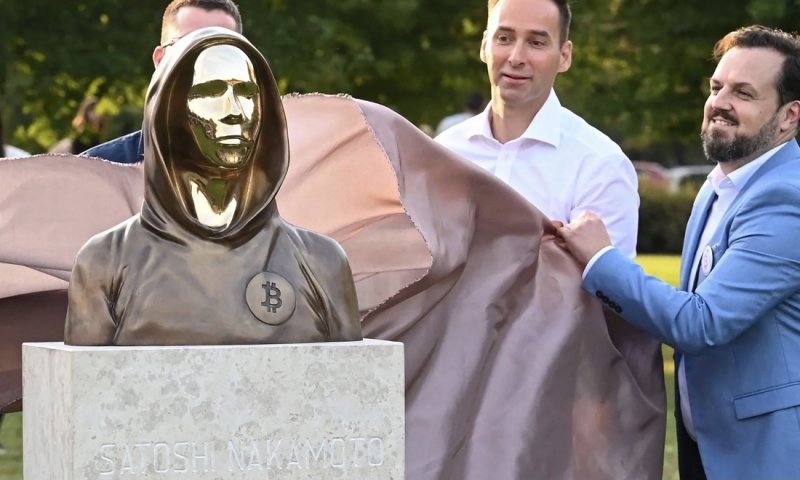 Members of a cryptocurrency community in Hungary unveiled a statue on Thursday honoring the anonymous founder of the Bitcoin digital currency.

The life-sized bronze bust sits atop a stone plinth at Graphisoft business park in Budapest, engraved with the name “Satoshi Nakamoto,” a pseudonym used by the unidentified developer of Bitcoin.

“We think of Satoshi as the founding father of the whole cryptocurrency industry,”Andras Gyorfi, a Bitcoin journalist and head of the project, told the Associated Press. “He created Bitcoin, he created the blockchain technology, he’s the god of our market.”

The sculpture has no discernible features and is instead a mirrored surface that allows visitors to see their own reflections in the face of Nakamoto’s, alluding to Bitcoin enthusiasts’ long-held belief that “We are all Satoshi,” and Bitcoin belongs to everyone who uses it. The faceless bust is also dressed in a hoodie with the Bitcoin logo on its chest.

Sculptors Reka Gergely and Tamas Gilly were commissioned to make the statue. It was funded with $10,000 in cryptocurrency from the community and announced at a Budapest Blockchain conference in May, according to the AP.

Gyorfi told the news organization that he invited Nakamoto to the unveiling ceremony in the hopes  of learning the creator’s true identity, but it is unknown if he was present.

The search for Nakamoto’s identity is as old as the Bitcoin currency itself and remains shrouded in mystery and speculation.

A paper titled ‘Bitcoin: a Peer-to-Peer Electronic cash System,’ now known as the “Bitcoin white paper,” was published in 2008 and circulated within cryptography circles. The paper is authored by the Satoshi Nakamoto, marking the first-ever mention linking the name to Bitcoin.

In 2009, 30,000 lines of code appeared, marking the beginnings of the open-sourced Bitcoin. The year after that, Nakamoto completely disappeared from the web, saying in an email to a Bitcoin Core developer he had “moved on to other things.”

Several people were theorized to be the anonymous Nakamoto, like the early Bitcoin miner Hal Finney, Australian entrepreneur Craig Wright, engineer Dorian S. Nakamoto, and even Tesla CEO Elon Musk. These connections have never been verified, and the men have either categorically denied or retracted claims that they are the Bitcoin founder.

Renewed interest in the Bitcoin founder’s identity spiked again when crypto exchange platform Coinbase filed an IPO in February and symbolically sent a copy of its filing to Nakamoto. The company said in the filing that revealing Nakamoto’s identity could severely compromise the value of Bitcoin.

Bitcoin was instrumental in ushering in the era of decentralized finance, removing banks and government institutions from transactions, and paving the way for other forms of crypto, like Ethereum and Dogecoin. Most recently, El Salvador became the first country to adopt Bitcoin as a legal tender.