Vietnam expects to accelerate the negotiation process with the UK and EU regarding the establishment of the Just Energy Transition Partnership (JETP), said Prime Minister Pham Minh Chinh at a meeting with Ambassador of the EU to Vietnam Giorgio Aliberti today [December 6]. 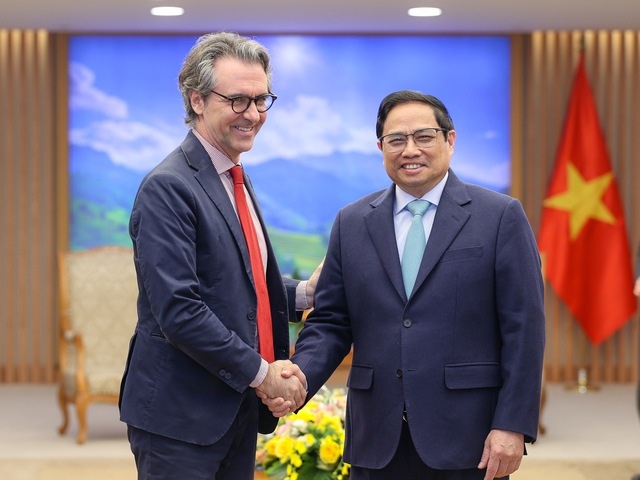 The world is undergoing an energy transition as climate change has emerged as a global challenge. “This requires a global approach to strengthen solidarity and multilateralism, along with a people-oriented solution that puts the people at the center, the engine and objectives for development,” Chinh said.

Such a process, however, should ensure justice and fairness for each country involved, Chinh added.

In the case of Vietnam, Chinh called for the EU to assist the country in accessing financial resources and technologies in climate adaptation and work with other development partners to map out specific supporting programs for Vietnam, especially in the production of equipment and the development of the renewables industry.

Discussing bilateral relations, Chinh expressed his delight at the strong Vietnam-EU partnership over the past 32 years, as both are moving toward an equal partnership in all fields for mutual benefits, including the implementation of the EU-Vietnam Free Trade Agreement (EVFTA).

The prime minister thanked EU agencies for providing nearly 30 million doses of Covid-19 vaccines and medical equipment worth VND40 billion (US$1.6 million) for Vietnam's fight against the pandemic.

Chinh stressed that Vietnam continues to pursue an independent foreign affairs policy for greater self-reliance and diversification while committing to being a credible and active international community partner.

“Vietnam aims to promote an independent and self-reliant economy with active global integration,” Chinh said, adding it would not sacrifice social advancement and equality for pure economic benefits.

He called for the two sides to further take advantage of the EVFTA and the EU to soon ratify the EU-Vietnam Investment Protection Agreement (EVIPA).

Regarding the yellow card imposed by the European Commission against Vietnam’s seafood exports for illegal, unreported, and unregulated (IUU) fishing, Chinh said the Government is working on a 180-day action program to lift the warning for the national interest.

Chinh expected the EU to soon give out its conclusion regarding the issue, taking into consideration the difficulties and differences in development level between Vietnam and the EU in the law-making process and fishery management.

For his part, Aliberti appreciated Vietnam’s determination and efforts regarding a wide range of issues, including the IUU and climate change response.

The EU Ambassador noted Vietnam remains an attractive destination for European investors, especially in green economic transition and renewables development, stressing the EU is committed to supporting Vietnam during its development process.