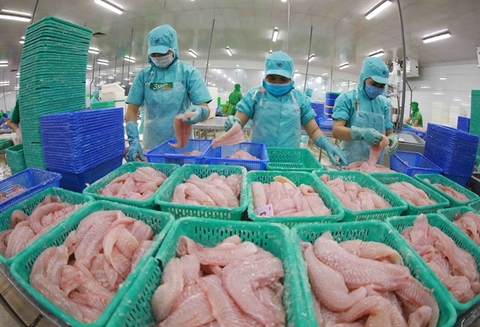 Among these products, the ministry attributed tra fish’s sharp increase to the strongest annual surge in the product’s average price, at 50 per cent. Exporters have also seized an opportunity to increase their market share created by the Russia-Ukraine conflict which limits the supply of white fish.

Meanwhile, shrimp export turnover also retained good growth so far thanks to strong rises recorded in the first half of the year. In the last half, the value declined due to a decrease in market demand and a short supply of raw materials. The product’s average export price did not increase as strongly as tra fish, as it faced significant competitive pressure from those of Ecuador and India.

With these positive figures, the nation's fishery export is projected to hit $11 billion in 2022.

The US remained the biggest buyer of Vietnamese goods, with $12.3 billion, making up 25 per cent of total shipments. China came next with $9.3 billion or 19.9 per cent while Japan ranked third with $3.9 billion or 7.9 per cent.

The ministry said it would continue to accelerate the restructuring of the industry, improve productivity and quality, and re-organise production according to specialised farming areas.

The ministry had guided localities, especially key rice growing, livestock and aquaculture areas to draw up production plans suitable to the market's needs, it said, adding that solutions to ensure a sufficient supply of food and pork, especially during the upcoming Tet holiday, would be also included.

Furthermore, the ministry would actively team up with the Ministry of Industry and Trade and the Ministry of Foreign Affairs to research and deliver analysis and forecasts of the global demand and supply of agro-forestry-fisheries goods.

Top priority would also be given to facilitating the application and transfer of science and technology and improving productivity and quality of agricultural products, it added.