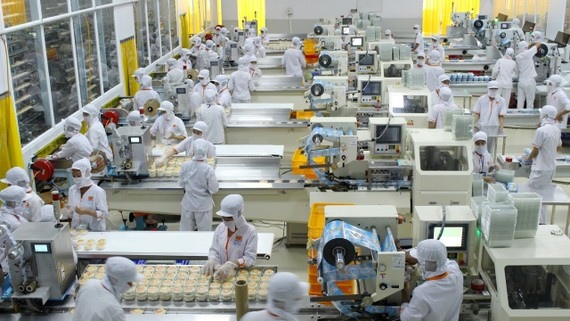 However, this year too many difficulties are inundating businesses, putting them in an extremely vulnerable situation.

Access to capital is difficult because banks have used up all credit limits, or access is subject to higher interest rates, which has also become a challenge for many businesses. In a talk with Saigon Investment, Ms. Lý Kim Chi, Chairwoman of the Food Association of Ho Chi Minh City, said that agriculture and food processing are priority areas, so businesses are getting loans with interest rates of only 5% to 6% per year.

The group of enterprises in agricultural production and food processing have suffered much impact due to high production costs and input material costs and still continue to bear high lending interest rates. Currently, 30% to 50% of the operating capital of these businesses comes from banks, so rising interest rates create more difficulties and pressures for businesses, especially for food businesses that have an urgent need for capital for production on holidays and year-end festivities like for Christmas and New Year.

Recently, the Vietnam Association of Seafood Exporters and Producers (VASEP) sent an official dispatch to the Minister of Agriculture and Rural Development, reporting the difficulties and problems affecting the production and business capacity of seafood enterprises for the end of 2022 and 2023. VASEP said that from mid-2022 until now, especially at present, many branches of commercial banks in localities have sharply cut credit for seafood enterprises, although the credit limit of many businesses is only disbursed upto 60% to 80% so far.

Without further disbursement, many large enterprises with large capital needs do not have enough money to purchase aquatic materials and supplies for production and have to operate in moderation, affecting the growth and export of the industry. There are even enterprises implementing seafood projects that have stopped construction.

Input costs are constantly increasing, while the output of products is not easy either. The group of non-essential foods is one of the items that consumers are gradually cutting back. Mr. Nguyễn Ngọc Luận, General Director of Global Trade Link Company, said that year-end consumer demand in the domestic market tends to slow down because consumers are tightening spending, especially for non-essential items. In the export market, in the last few months, demand has dropped markedly, and orders have fallen sharply, especially in European markets, which are strongly affected by inflation and the ongoing Russia-Ukraine conflict.

Similarly, many non-essential food products such as cashew kernels are also facing difficulties when exporting. In the first ten months of 2022, the export of cashew kernels decreased by 11.6% in volume and 15.5% in turnover compared to the same period in 2021. Orders of textiles, garments, and footwear industries decreased by 20% to 40% over the same period. Many businesses have had to reduce working hours to maintain jobs for workers. Some businesses could not survive and were forced to lay off thousands of workers.

According to the survey results of more than 400 manufacturing enterprises in Vietnam by S&P Global published in early November by HS Markit, the situation is not very positive when the number of new orders increased at the weakest rate in more than a year, causing output, employment, and purchasing activity to increase more slowly.

Talking about policies to support businesses, Mr. Nguyễn Ngọc Luận said that businesses hardly have access to the Government support packages. It is time for the Government to separate support packages into two groups, one for large enterprises, and one for small, medium, and micro enterprises. Only in this way can businesses get rid of the difficulties that have lasted since the time of the Covid-19 pandemic.

Talking about the support packages, Ms. Lý Kim Chi said that currently the State Bank of Vietnam only mobilizes commercial banks not to raise interest rates, but there are no specific measures to support businesses. It is very difficult to force banks not to raise lending rates in the context of high global inflation. The only solution now is to ask the State Bank of Vietnam to ease lending and disbursement conditions with a 2% interest rate support package. Also, propose to the Government to put businesses in key industries such as agriculture and food processing into priority group to be able to access this interest rate support loan.

Ms. Chi suggested that the State Bank of Vietnam must direct commercial banks to jointly apply low-interest rates for enterprises participating in the market stabilization program of Ho Chi Minh City. Currently, only one or two banks have agreed to reduce interest rates for businesses in our industry to participate in stabilizing the market, such as Vietcombank reducing the interest rate by 1% to 7.5%. With reasonable preferential interest rates, enterprises participating in stabilizing the market can expand production, import raw materials, create conditions to save costs, stabilize production, and especially keep the price of essential foods stable before, during, and after the upcoming Tet, in order to share difficulties with the people.

While waiting for Government support, businesses are self-aligning to support each other through business associations, not only at the city and district levels, but also at the commune level to be able to go deeper into the activities of each enterprise. Recently a branch of enterprises in Nhi Binh commune in Hoc Mon commune was established with the desire to support each other to overcome difficulties in trade promotion, and at the same time, support small loan packages in the group to provide capital for short orders.