Vietnam’s rice exports continue to beat records with strong growth in both volume and revenue, showcasing the agricultural sector's efforts to meet the high standards of the global market. 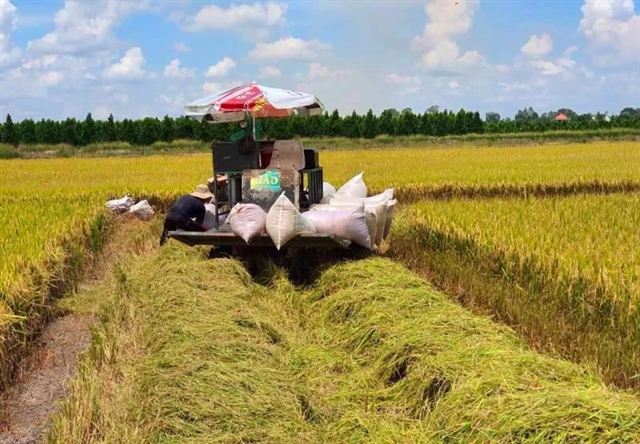 Data from the Ministry of Agriculture and Rural Development (MARD) reveal that Vietnam's rice exports reached a monthly record of 713,546 tons in October, bringing in US$341 million, up 22.3% in quantity and 23.9% in value from the previous month.

For the ten months, the total volume of rice for exports stood at over six million tons worth nearly $3 billion, up 17.4% in quantity and 7.6% in value year on year.

Vice Minister of Agricultural and Rural Development Phung Duc Tien said the total export volume in 2022 would be 7.2-7.3 tons, the second-highest rice export volume in the history of Vietnam’s rice production sector.

Vietnam’s average rice export price during the ten months was estimated at $484 per ton.

According to the MARD, the Philippines is Vietnam’s largest rice buyer, with 2.7 million tons, or 45% of Vietnam’s rice exports, for $1.2 billion.

Export to other high-standard markets has also witnessed substantial growth, including the US (up 84.8%) and the EU (82.2%).

The VFA added Vietnamese high-quality and fragrant rice, such as ST24, ST25, or Jasmine are fast becoming the market’s favorites.

EU currently allocates a quota of 80,000 tons for Vietnam’s rice at a preferential tariff of zero. The VFA expected Vietnam to export at least 60,000 tons of rice to the bloc this year.

It is also worth mentioning that the prices of Vietnam’s rice are currently at the top of the market thanks to its high quality.

VFA’s Vice Chairman Do Ha Nam attributed the high rice export growth to the appreciation of the US dollar, saying the price’s upward trend may last until late December.

According to the MARD, Vietnam produces 22-23 million tons of rice annually, but only 15% are exported to ensure national food security.

To further facilitate rice export, Deputy Director of the MARD’s Department of Agricultural Products Processing and Market Development Le Thanh Hoa urged local firms to focus on the Chinese market, which remains among the world’s largest.

However, Hoa noted that the market is changing regarding requirements for imported products, from sanitary control, packaging, and labeling to traceability of origin.

Currently, only 22 Vietnamese companies are qualified to export rice to China with a limited amount.

“In the past years, Vietnam was allocated a quota of over 2 million tons of rice per year to the market, but the amount has gradually exhausted. We are working with the Chinese counterparts to add more rice traders to the export list,” Hoa said.

In addition to China, the MARD suggested the EU and UK are potential markets due to high demand and free trade agreements between Vietnam and these two partners. “Local traders should work closely with rice producers and suppliers to ensure products meet technical standards of the import markets,” stated the MARD.

Vice Minister of Agricultural and Rural Development Phung Duc Tien said the agency is working with the Ministry of Industry and Trade to monitor the market situation and provide information for traders to promote rice exports.

In the long term, Tien expected a focus on restructuring rice production, concentrating on high-quality rice products, and promoting brands for Vietnamese rice.

Over the years, crop production in Hanoi has seen a positive transformation, especially in agricultural mechanization and high-quality rice varieties such as J02, HDT11, or North Fragrant No.7.

The Hanoi Agro-Forestry-Fisheries Quality Assurance Sub-Department estimates the demand for rice consumption for the city at 1.16 million tons per year, while total production is around 680,000 tons, meeting 60% of the local demand.

In this context, Hanoi is securing additional supplies from neighboring provinces/cities and imported sources in Thailand and Japan.

Director of Hanoi’s Department of Agriculture and Rural Development Chu Phu My said the city would continue strengthening linkage with other provinces/cities in agricultural production to meet domestic demand better.

In addition, the city would cooperate with the Ministry of Agriculture and Rural Development to ensure food safety and improve the quality of the agro-forestry-fishery supply chain between Hanoi and other provinces/cities in the 2021-2025 period.

“The main goal for the city from now until 2025 is to ensure effective management of agricultural land, focusing on high-quality rice varieties for domestic consumption and exports,” My said.

In the first 10 months of 2022, Hanoi's rice exports stood at US$252 million, representing an increase of 20% against the same period of last year.