Liz Truss, who took office as Prime Minister on September 5, has announced that she will step down. With this decision, Ms. Truss became the shortest serving Prime Minister in British history. 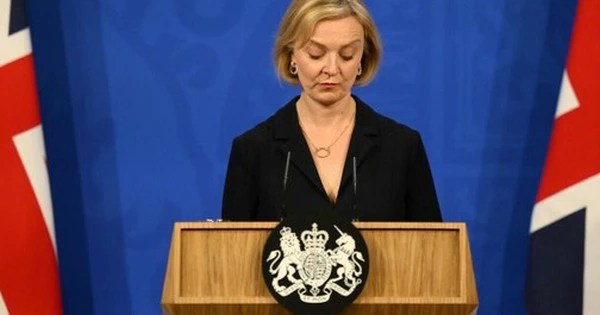 On October 20, Ms Truss said she would step down as her economic agenda caused turmoil in financial markets and divided the Conservative Party. The decision was made just six weeks after she took office.

A vote to elect the leader of the ruling Conservative Party will be completed next week to find a replacement for Ms. Truss. Before her, Mr. George Canning was the person to hold the post of British Prime Minister for the shortest time. He was prime minister for 119 days until his death in 1827.

Speaking at the Prime Minister’s Office at 10 Downing Street, Ms. Truss accepted that she could not deliver on her promise when running for Conservative leader, thus losing the confidence of her party.

“I admit, given the situation, I am unable to carry out the duties that I have been entrusted with by the Conservatives. Therefore, I have spoken to the King to announce that I will step down as leader of the Conservative Party,” Ms. Truss said.

Ms. Truss also said she had met Mr. Graham Brady, chairman of the 1922 Committee, to discuss and agree that the Conservatives would have a new leadership election next week. This is done to ensure the ruling party continues to implement its fiscal plans and maintain economic stability and national security for the UK.

“I will continue to serve as prime minister until a successor is found. Thank you,” Ms. Truss said.

Earlier, a growing number of Conservative lawmakers called for Ms. Truss to step down after she was forced to scrap much of her tumultuous economic agenda. The so-called “mini-budget” backed by Ms. Truss’ government has sent sterling and government bonds plummeting.

Ms. Truss had previously fired the Finance Secretary and replaced Mr. Jeremy Hunt. The new finance minister has scrapped almost all of Ms. Truss’ economic lines. Hours ago, another senior minister in the Truss Administration announced his resignation.

Conservative lawmakers say her successor is likely to be her opponent, former Finance Minister Rishi Sunak, or Penny Mordaunt, who finished third in the race for prime minister six weeks ago.

Mrs. Truss was born on July 26, 1975, in Oxford. Her father was a math professor and her mother was a nurse. In 1996, Ms. Truss graduated from Oxford University with a degree in Philosophy, Politics, and Economics (PPE). After graduation, she worked as an accountant for Shell, and Cable & Wireless.

During her campaign, Ms. Truss focused on her pledge to cut taxes. She also pledged to take immediate action to help households cope with soaring gas and electricity prices.