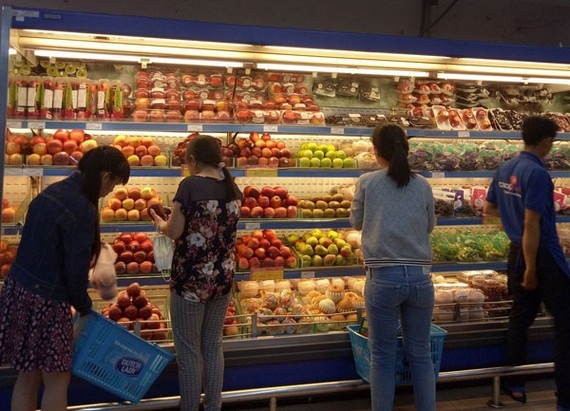 Now it is being seen that several large supermarkets are gradually beginning to remove Vietnamese local produce from their shelves due to lack of response. It is necessary to go behind the scenes to assess the actual situation as to why local produce is not being sold from large foreign-invested supermarkets.

Statistics show that in the first seven months of 2022, fruit and vegetable exports from Vietnam reached USD 1.92 bln, down 16.1% over the same period in 2021. In the last seven months, Vietnam also spent up to USD 1.1 bln to import vegetables, which were up by 27.3% over the same period last year. The three largest markets for imported fruits and vegetables for Vietnam in the first half of 2022 were China, the US, and Australia, accounting for 35.6%, 16.4%, and 9.3%, respectively.

Due to increasing international integration, and the participation of Vietnam in Free Trade Agreements (FTAs), foreign goods are overflowing into Vietnam. However, the continuously huge increase in the import of vegetables and fruits in recent years is also gradually inundating the domestic market, which should serve as a warning for Vietnamese fruit and vegetable producers.

Just a few years ago, if housewives wanted to buy foreign fruits, they had to visit big supermarkets or go to high-end fruit stores. They also had to pay quite a high price to buy any fruit from the US, Australia, Spain, or New Zealand. However, now foreign fruits are not only sold in large quantities in supermarkets but also occupy an overwhelming portion of the fresh fruit counters in the markets where previously only domestic grown fruits were sold. Foreign fruits on display in the shelves in foreign-invested supermarkets in Vietnam are from European Union countries as well as from China, Thailand, and Taiwan.

When we look at all the fruit shelves in the big supermarkets, we see more than a dozen kinds of imported fruits with very few being of Vietnamese origin. For instance, in Hanoi on Giai Phong, Tan Mai, and Nguyen Xien streets we see many Vietnamese fruit vendors sitting along the sidewalks, or some street cart vendors selling exotic oranges at VND 25,000 per kg while local watermelon is being priced at just VND 10,000 per kg. It is not just fruits, but many other agricultural products are also suffering the same fate. It is a sad situation that on the home turf Vietnamese goods are being replaced by exotic foreign goods in large supermarkets as well as at street market stalls.

The Steering Committee for the Campaign "Vietnamese people to prioritize Vietnamese goods" stated in its report that in the ten years of implementation of this campaign, the percentage of Vietnamese goods in supermarkets has always maintained at over 90%. It is a fact that Vietnamese goods account for a high proportion in the domestic supermarkets, but they find it difficult to break into large foreign-invested supermarkets.

According to Mr. Vũ Vinh Phu, a market expert and former chairman of the Hanoi Supermarket Association, one of the reasons why it is difficult for Vietnamese goods to enter foreign-invested supermarkets is because of many technical barriers, although this is not the only reason. The reason why Vietnamese goods are being sold mainly at Vietnamese enterprises is because they can be heavily discounted, and capital can be misappropriated when transporting goods into the supermarkets invested by foreign enterprises.

Currently, about 85% of goods sold at supermarkets are accepted under a consignment basis which means that businesses will send goods to supermarkets and later the supermarkets only pay back to businesses when goods are sold. This way, the supermarkets do not have to spend capital and still make a profit on the agreed-upon payment which is refunded to the business within 15 to 20 days after the item has been sold, or in some cases even up to three months.

When the capital of a manufacturing enterprise has been appropriated, it makes it difficult for that enterprise to reinvest in production. In addition to capital misappropriation, accompanying costs and heavy discounts offered by supermarkets are also eroding into the profits of manufacturing enterprises. Mr. Phu cited a case where a lot of vermicelli entering a supermarket cost VND 20 mln in code generation fee.

After three months, businesses still cannot import goods for sale in supermarkets right away and are required to complete many procedures. To sell regularly, products that are sold through the distribution channels must be discounted by 35%, and if they are discounted by 15% or 20%, they can only be sold once a year. Even fertilizers and pesticides have to be discounted up to 60% to be distributed.

Late payments and heavy discounts have forced manufacturers to push up product prices when selling to the markets, and it is the consumers that have to bear these costs. As a result, goods are always marked for sale at a higher level which makes it difficult for Vietnamese goods to compete with imported goods. This is detrimental for local Vietnamese goods as they often have to retreat from many supermarkets. These are among the factors that make the prices of goods more prohibitive, and once the price rises it will be difficult to decrease.

This negative factor has existed for the last several years and there has been no intervention to correct this situation, which is actually the direct responsibility of the Ministry of Industry and Trade. Recently, the Prime Minister requested that measures be strengthened to manage and control prices. The problem of price management in the supermarket system itself is what needs to be rectified right now by avoiding goods to establish a new price level when gasoline prices have decreased.