Samsung is expected to expand investment in Vietnam with an additional fund of US$3.3 billion, along with an export target of US$69 billion from its manufacturing facilities in the country. 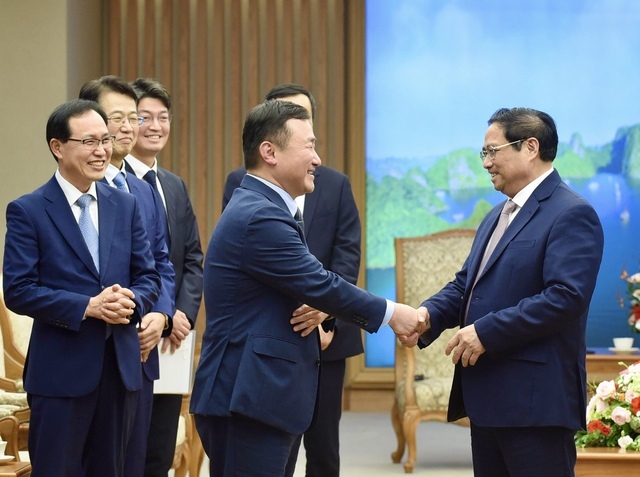 According to Roh, Samsung Vietnam exported more than $34.3 billion worth of electronic products during the first six months of 2022, representing an increase of 18% year-on-year.

Roh noted the South Korean IT giant is preparing for mass production of semiconductor components at the Samsung Electro-Mechanics Vietnam plant in Thai Nguyen Province from July 2023, and also for the launch the R&D center in Hanoi by late 2022, which is 85% complete.

This would be Samsung’s major R&D hub not only in Vietnam but also the whole of Southeast Asia, he added.

In addition, Roh suggested Samsung would continue to help 50 local businesses enhance competitiveness via the promotion of smart factories; strengthen cooperation with universities and R&D centers in the country.

For his part, Prime Minister Chinh expressed his delight at the strong progress of the Vietnam-South Korea strategic partnership over the years.

South Korea is currently Vietnam’s third largest trading partner, behind China and the US. In 2021, bilateral trade turnover stood at $78 billion, accounting for 11.6% of Vietnam’s total trade revenue.

“Investment cooperation with Samsung is an example of the Vietnam-South Korea relations,” Chinh said.

The prime minister added Vietnam is pushing for an independent and self-reliant economy with active integration into the global economy.

In this context, the Vietnamese Government would continue to create favorable conditions for foreign investors in general and Samsung in particular, based on trust, sincerity, and sharing of risks and benefits.

“The Government is committed to further improving the workforce quality to meet growing demands from businesses and investors,” he continued.

Chinh called for Samsung to expand operations in Vietnam, and considers the country as a key part of production and R&D, in turn contributing to the Vietnam-South Korea relations.

Chinh expected Samsung to further invest in a semiconductor plant in Vietnam, one of the three core businesses of Samsung. This, along with the production of smartphones and household appliances, would complete Samsung’s electronics production chain in Vietnam.

He asked Samsung to maintain its leading role in enhancing Vietnamese businesses’ competitiveness so that more local companies could take part in the South Korean company’s ecosystem, and improve the localization rate.

Amid a global shift of FDI flow around the world, Chinh expected more South Korean companies and multinationals to come to Vietnam and diversify the global supply chains.

With an investment capital of US$220 million, Samsung’s R&D project covers an area of 11,603 square meters in the West of Hanoi. Once completed, it would employ between 2,200 and 3,000 people. This is Samsung Electronics’ first R&D center outside South Korea, and also the largest of its kind by a foreign-invested business in Vietnam.

The project is expected to help enhance the research capabilities of Vietnamese engineers not only in products development, but also in artificial intelligence (AI), internet of things (IoT), big data, and the fifth generation (5G) network, among others, creating a solid foundation for Vietnam to grasp opportunities from the Fourth Industrial Revolution.