The World Bank would continue to cooperate with Vietnam beyond the financial aspect and helps the country address strategic development objectives, such as public health capability, pandemic, and climate change response. 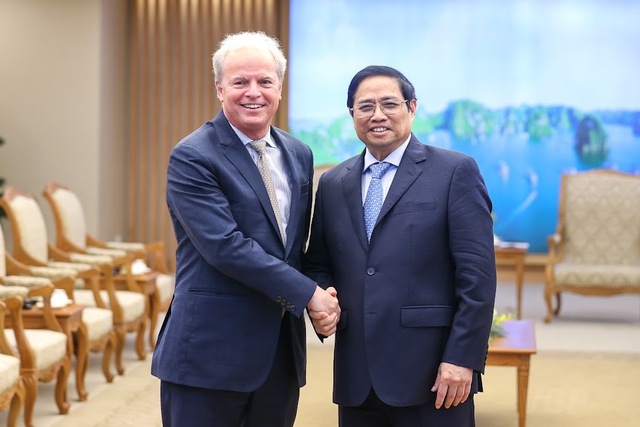 Axel expressed his impression of the performance of the Vietnamese Government in its endeavor for socio-economic development amid a turbulent period, including the flexible and harmonious management of monetary and fiscal policies.

Witnessing the dynamic and peaceful daily lives in Hanoi, Axel said this evidenced the fact that Vietnam has done better than other countries in containing the pandemic and stabilizing the macro-economy for economic recovery.

Over the years, Vietnam has been maintaining high economic growth, and is a part of the rapid economic development in the Asia-Pacific region, Axel said.

He called for Vietnam to share its experience in pandemic response and development with other countries and contributes to solving global challenges, including food security.

For his part, Prime Minister Chinh welcomed Axel’s visit to Vietnam, saying the World Bank has always been a good friend and credible development partner of the country.

According to Chinh, the World Bank has been providing effective support for Vietnam in terms of financial resources and policy consultancy for socio-economic development and the formation of an e-Government.

From June 2020 to June 2021, the World Bank has agreed to defer Vietnam’s payment of IDA loans worth nearly US$400 million for more than one year, in turn helping the country to address other urgent issues in pandemic response, Chinh said.

He also noted six development banks have committed $2.2 billion for investment projects in the Mekong Delta region, including $450 million from the World Bank.

Meanwhile, Vietnam has agreed to donate nearly $16 million in the 2021-2023 period to World Bank to fund its operation, showcasing the responsibility and efforts of Vietnam amid a difficult economic environment.

Chinh highlighted the World Bank's support for Vietnam in drafting the Vietnam 2035 report and is in the process of developing the Vietnam 2045 report, which is in line with the country’s vision for development until 2030.

“Vietnam aims to refine legal framework to build an independent and self-reliant economy, with high resilience against external shocks and dynamism in global integration,” Chinh said.

Chinh referred to Vietnam’s strong commitments made at the COP26, noting this is one of the key priorities for Vietnam to shift its development model toward a green, sustainable, and low-carbon economy.

On global issues such as pandemics, climate change, or food security, both sides agreed on the fact that the international community would need a global approach that requires solidarity and multilateralism.