Co-presided over by Ambassador Thang and President of the French Chamber of Commerce and Industry in Vietnam (CCIFV) Thibaut Giroux, the event aimed to promote trade and investment between Vietnam and France. It also saw the presence of French Consul General in Ho Chi Minh City Emmanuel Pavillon Grosser and representatives from nearly 80 companies and investors from both sides. 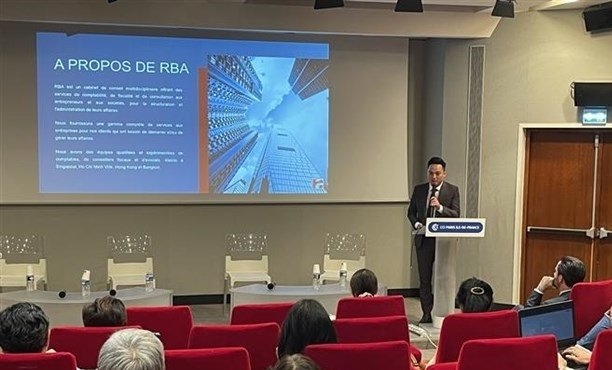 The Paris seminar aims to promote trade and investment between Vietnam and France (Photo: VNA)

In his remarks, Thang highlighted Vietnam as one of the fastest-growing and most dynamic economies in ASEAN, saying the Government of Vietnam has been persistently improving legal framework to attract French investors in the fields of mutual interest, particularly hi-tech industries and those promoting sustainability and environment protection.

The diplomat described the EU-Vietnam Free Trade Agreement (EVFTA) as a landmark trade deal providing a stable and long-term framework for trade, economic and investment cooperation between Vietnam and the EU, including France.

The two countries will celebrate the 50th anniversary of the bilateral diplomatic relations and the 10th year of their strategic partnership in 2023, and Thang expected the Vietnam-France economic ties will see strong breakthroughs in the coming time, with more and more French enterprises selecting Vietnam as a destination for investment.

According to the ambassador, France is now Vietnam’s second largest investor among EU countries, pouring more than US$3.6 billion into the Southeast Asia country

An open and lively discussion among speakers and representatives of French businesses took place as part of the event. The French enterprises wanted to explore Vietnam’s tax rates applicable at industrial parks, the government’s investment incentives for foreign investors, and the country’s strategy and policies for the development of the renewables and the governmental support for foreign companies in new product R&D, startup and innovative projects.

Vietnam's geographical location in the centre of ASEAN makes it very competitive among its peers in the logistics sector, CCIFV President Thibaut Giroux told Vietnam News Agency, adding that its population of 100 million and large workforce are attractive to foreign enterprises.