Vietnam’s budget transparency score moved up nine ranks in 2021 to stay at 68th out of 120 countries and territories. 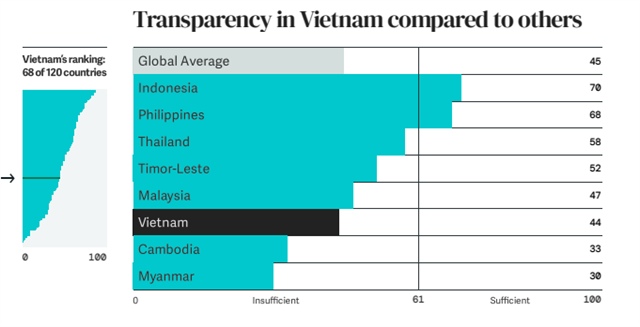 In Southeast Asia, the country stood above Cambodia and Myanmar, but behind Thailand, Malaysia, the Philippines, and Indonesia.

Countries standing at the top of the 2021 OBS version included Georgia, South Africa, and Sweden, while Germany, Norway, and South Korea were the three countries with the highest score in “budget oversight”. South Korea, the UK, and New Zealand also took the top spot in terms of “public participation”.

Among the world’s economic powers, the US was named in the top 20 countries with budget transparency, while China languished in the lower tier at 103rd.

In 2021, Vietnam had a transparency score of 44 out of 100,  though its grade in public participation was 17, the coutry's budget oversight scored 80, among the world’s top tier.

IBS noted Vietnam has increased the availability of budget information by improving the comprehensiveness of the Citizens Budget and providing information on forward-looking multi-year revenue and expenditure estimates.

To further improve the budget transparency, it called for Vietnam to include revised and updated estimates for the remaining six months and forward-looking macroeconomic estimates in the mid-year review; a detailed executive’s budget proposal; and a year-end report comparison between borrowing estimates and actual outcomes.

In 2020, the Ministry of Finance launched the budget transparency portal to ensure information and data publicity. The portal is frequently updated on the budget estimate and final settlement of central agencies and provinces/cities.

The Open Budget Survey (OBS) is the world’s only independent, comparative, and fact-based research instrument that uses internationally accepted criteria to assess public access to central government budget information; formal opportunities for the public to participate in the national budget process; and the role of budget oversight institutions, such as legislatures and national audit offices, in the budget process. The survey helps local civil society assess and confer with their government on the reporting and use of public funds. This 8th edition of the OBS covers 120 countries.