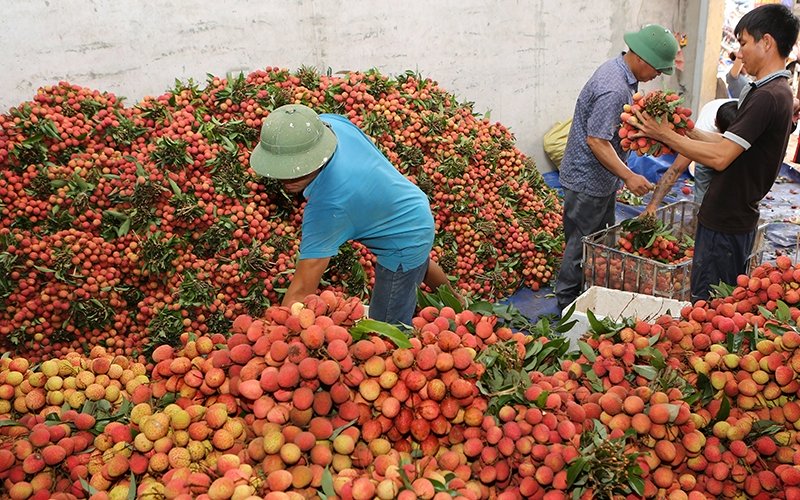 NDO – Vietnam’s fruit and vegetable exports were estimated at 1.47 billion USD in the first five months of the year, down 13.6% compared to the same period in 2021, according to the Ministry of Agriculture and Rural Development. In May alone, the export turnover was posted at 300 million USD, down 11% compared to May 2021. Meanwhile, many southern localities are harvesting many kinds of fruits, requiring appropriate solutions for domestic consumption and export.

Large output needs to be consumed

According to the Food and Agriculture Organisation of the United Nations (FAO), the demand for domestic fruit consumption is about 68-70kg per person per year. With a national population of more than 96 million people and 15-16 million tourists, Vietnam is a relatively largeconsumption market.

China is still the main export market of Vietnam, accounting for nearly 57% of the total market share. However, China has stepped up measures to control the COVID-19 epidemic in recent times, which has greatly affected Vietnam’s fruit and vegetable exports.

In addition, the increasing requirements for quality and product traceability of the Chinese market also led to an increase in quarantine measures, causing congestion of goods at border gates and a slowdown in the export progress.

Moreover, the increases in input costs for production, fertilisers, and pesticides have also affected fruit tree production, possibly affecting the yield and quality of fruit. Vietnam’s fruit processing capacity is still limited with the main export of fresh fruit, which is greatly affected by market fluctuations.

Deputy Director of Plant Protection Department Le Van Thiet said Vietnam has also exported six types of fruit to the US market, including dragon fruit, mango, lychee, longan, rambutan, and star apple. The two sides are in the final negotiations to open the door for Vietnamese pomeloto enter the US market.

Vietnam has exported fresh fruits such as dragon fruit, mango, and lychee to the Japanese market. The Plant Protection Department is also negotiating with Japanese authorities on exporting longan by cold treatment. This method will be a premise to export other fruits to Japan shortly.

Sharing about Gia Lai province’s practices in fruit production and consumption, Deputy Director of theProvincial Department of Agriculture and RuralDevelopment Doan Ngoc Co said passion fruit is currently a strong crop in the province with a profit of about 350-400 million VND per ha per year. This achievement is thanks to production and consumption linkages between fruit growing regions and enterprises.

According to General Secretary of the Vietnam Fruit and Vegetable Association Dang Phuc Nguyen, the promotion of banana exports is also the right market orientation because the export of other fruits to the Chinese market has shown signs of decrease while banana exports have made great progress.

Over the first five months of 2022, China imported 742,000 tonnes of bananas, up 10% over the same period, of which Vietnamese bananas accounted for 43%, surpassing the Philippines with 28%. Dang Phuc Nguyen also said that China will continue to increase the import of Vietnamese bananas because China’s banana-growing area has decreased, leading to an increase in import market share.

Businesses also expect localities to actively build planting areas granted with codes to facilitate the purchase of export fruit as the granting of planting area codes is still limited. Specifically, there were only 1,561 codes in the Mekong Delta region, accounting for 30.02% of the total planting areas while the Southeast region has 224 codes, occupying 5.6% of the total areas and the Central Highlands region has 168 codes, accounting for 4.2% of the region’s total areas.

Finally, deep processing is still the core solution to the problem of fruit preservation and consumption that Vietnam needs to pay due attention to. Chairman of the Association of High-Quality Vietnamese Products, Vu Kim Hanh said: “Looking from Thailand, they have gone into deep processing of fruit products with a very high level. While Vietnam is still selling fresh durians, dried durian, and frozen durians, Thailand has organised durian buffets at restaurants.”