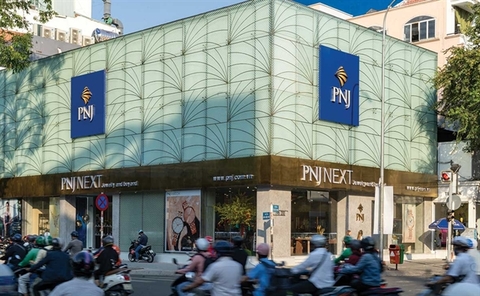 The market’s breadth remained negative with 445 stocks declining, of which up to 233 stocks posted the maximum daily loss of 7 per cent. Liquidity, however, was higher than the previous session with nearly VND18.8 trillion (US$818 million) worth of stocks, equivalent to a trading volume of more than 673.76 million shares, traded on the southern bourse.

The index’s sharp fall was due to strong sell-off activities since the market opened. Stocks across all sectors plunged with the 30 biggest stocks tracker VN30-Index decreasing 59.17 points, or 4.31 per cent, to 1,315.04 points.

Of the VN30 basket, all 30 stocks slid yesterday with 13 stocks hitting floor prices.

Data compiled by vietstock.vn showed that in the top five stocks influencing the market bearish trend, four stocks dropped 7 per cent - the biggest intraday loss on HoSE, which were BIDV (BID), VPBank (VPB), Techcombank (TCB) and Vietinbank (CTG). The other stock was PV Gas (GAS), down 4.46 per cent.

The downtrend was in line with expectations from many securities firms that the VN-Index is likely to breach the support level of 1,300 points this week, as the market is short of cash flows and leading stocks.

On the Ha Noi Stock Exchange (HNX), the HNX-Index also finished lower yesterday on strong selling force. The index closed the trade at 323.39 points, down 20.07 points, or 5.84 per cent.

During the session, nearly 98.4 million shares were traded on HNX, worth over VND2 trillion.

Meanwhile, foreign investors were net buyers on both main exchanges, with a net buy value of VND589.32 billion. Of which, they net bought nearly VND15.1 billion on the northern market and VND574.24 billion on HoSE.