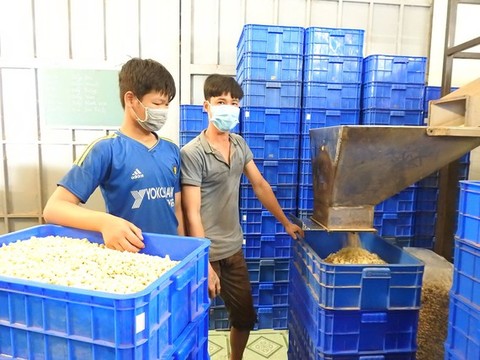 The province has around 134,000ha of land under cashew and over 1,400 processing businesses that export the products to markets such as the US, Australia and China.

Of them 31 are able to import raw cashew while the rest are too small for that.

Dang Van Hau, owner of a cashew processing facility in Bu Gia Map District, said this year both Viet Nam and Cambodia, another source of imports, lost their cashew crops due to unfavourable weather.

Due to COVID-prevention measures and a shortage of empty containers, it has been difficult to import raw cashew from Africa.

Ta Ngoc Tuan, owner of another processing facility in Bu Gia Map District, said he had signed a contract to sell cashew but could not increase prices and had to deliver in time despite the raw material shortage and higher prices or compensate his partner and risk losing his reputation.

According to the province Department of Agriculture and Rural Development, cashew depends greatly on the weather and yields are poor in case of unseasonable or heavy rains, hoarfrost and too much sun.