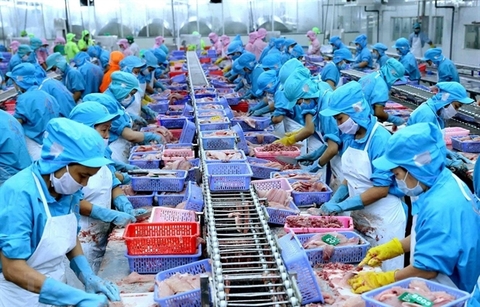 Total trade value in agricultural, forestry and seafood products hit $31.8 billion in the first four months, an increase of seven per cent year-on-year, the ministry reported.

Aquatic exports saw the highest growth during the period at 43.7 per cent to reach $3.6 billion. Shipments of key agricultural and forestry products exceeded $7.4 billion and $5.9 billion, up 10.5 per cent and 4.9 per cent, respectively. Meanwhile, those of husbandry products plummeted 19 per cent year-on-year to $105.4 million.

The US remained the largest export market for Viet Nam’s agricultural, forestry and seafood products with nearly $4.9 billion, accounting for 27.3 per cent of the total exports. Around 68.2 per cent of Viet Nam’s exports to the US were timber and wood products.

China came second with over $3.2 billion, representing 18.1 per cent of total shipments.

The third was Japan with a turnover of nearly $1.3 billion, accounting for 7.1 per cent of the total exports. The fourth-largest export market was South Korea with a value of $822 million.

To expand markets and boost exports, MARD would promote bilateral and multilateral cooperation activities. The ministry is preparing to organise a trade delegation for promoting the supply of fruits and seafood in China.

At the same time, MARD will focus on negotiating and completing procedures for risk assessment and inspection to promote the export of mango and chicken meat to South Korea, pomelos and lemongrass to New Zealand; feathers, bird's nests and products made from bird's nest, and milk and dairy products to China; and honey to the EU.

The ministry will also visit pomelo growing areas and irradiation plants to discuss with partners plans to export pomelos to the US.

MARD has also required the departments of agriculture and rural development to monitor and report on prices, production and supply of agricultural products in localities to strengthen support in processing, domestic consumption and export, especially at border gates. Especially, the ministry will provide information about market regulations, and import and export control between Viet Nam and China.

Nguyen Quoc Toan, director of the Department of Agricultural Product Processing and Market Development under MARD, said that in April, the department worked with the Enterprise Development Department under the Ministry of Planning and Investment to implement digital transformation in small businesses, and the wider agricultural sector. That would help this sector and enterprises gain more efficiency in production and business, including export of farming, forestry and seafood products in the future.