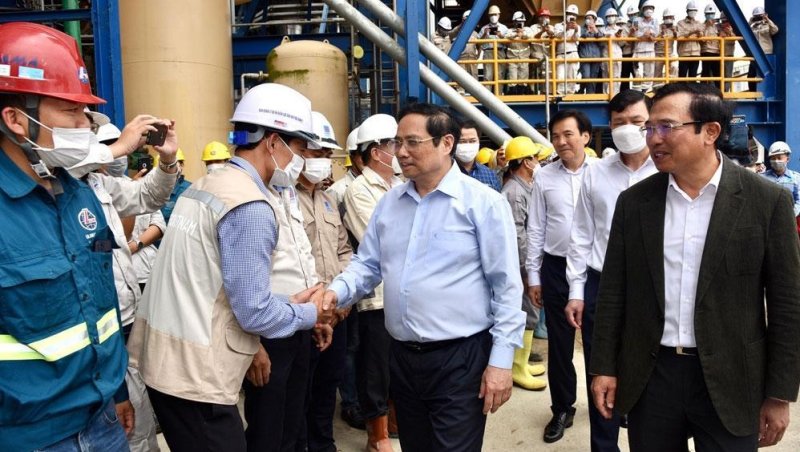 NDO/VNA - Prime Minister Pham Minh Chinh inspected a series of socio-economic locations in the northern province of Thai Binh on May 8.

Examining the investment in as well as construction and operation of the Thai Binh Economic Zone, Chinh affirmed the building of the site is in line with the Party’s policy and resolutions and with the province’s conditions.

Covering more than 30,000ha, including 8,000ha earmarked for industrial, urban and service development, the zone is expected to become a driving force and key economic development area of the province and the Southern Red River Delta region. The zone is now home to a number of key projects.

The PM highlighted the importance of related land clearance and resettlement works and requested the construction of a complete, interconnected and harmonious infrastructure, especially regarding traffic, electricity-water, worker housing, and environment.

At the zone, the leader inspected the construction site of the Thai Binh 2 thermal power plant in Thai Thuy district. Invested by the Vietnam Oil and Gas Group (PetroVietnam), the building of the 1,200MW plant began in 2011.

He recommended efforts for the completion of remaining workload, and said he is confident that following the set goal, the plant will join the national grid by the end of 2022.

On the day, the PM also attended at a ceremony to start the construction of the southern ring road of Thai Binh city. The 8km road is estimated to cost more than 6,000 billion VND (261,364 USD).

Today, 05:00
With Hardox(R) In My Body Program, SSAB is Expanding Marketability in Manufacturing Sectors