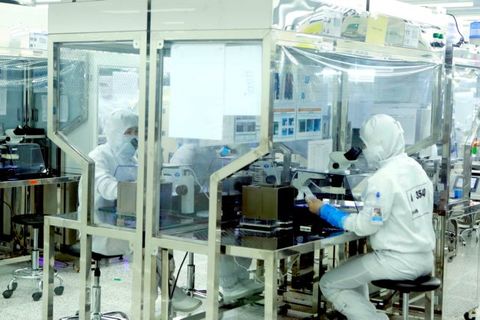 They will also target improving science and technology capacity for enterprises in supporting industries and those in processing and manufacturing, strengthen domestic and international cooperation in research and development and facilitate the application of science and technology, besides enhancing the public-private partnership mechanism in technological innovation, research and development projects.

The development and operation of such centres will help create key economic zones to support businesses in promoting innovation, improving production techniques and trade connections, and creating added value for the industry.

Initially, these centres had implemented several activities to facilitate enterprises in supporting industries in some localities, including bettering links among firms in the automobile industry, electronics, mechanical engineering, textiles and footwear and cooperating with multinational corporations available in Viet Nam such as Toyota, Mitsubishi and Canon to find suitable local suppliers to participate in the value chain of these corporations.

Truong Thanh Hoai, head of the agency, told congthuong that Vietnamese small and medium-sized enterprises needed support from the State until they could compete in the global market and become a reliable production partner for the worldwide production chain. For this, support innovation, production management systems, access to preferential credit sources, new technologies and high-quality human resources were essential.

In April, Viet Nam’s index for industrial production (IIP) increased 9.4 per cent year-on-year and 2 per cent month-on-month, thanks to good control of COVID-19 and enterprises taking the bigger initiative in labourers and business and production plans for expansion, the General Statistics Office has said.

During the month, the manufacturing and processing sector, which created 80 per cent of industrial growth, expanded 11.3 per cent year-on-year, much higher than 5.8 per cent and 9.6 per cent seen in 2018 and 2019 - two years before the pandemic.

According to GSO, the IIP also saw a positive increase of 7.5 per cent on year in the first four months of this year.

The processing and manufacturing industry had a yearly IIP rise of 8.3 per cent. Meanwhile, the IIP growth of the electricity production and distribution industry stood at 6.6 per cent, and the mining industry and water supply and waste and wastewater treatment reached 2.6 per cent and 1.1 per cent, respectively.

On the contrary, several industries saw a decline in industrial production, such as rubber and plastic products, by 13 per cent; repair, maintenance and installation of machinery and equipment (11.5 per cent); coke and refined petroleum products (8.3 per cent); and crude oil and natural gas (2 per cent).

Among industrial products with strong IIP increases in the period were telephone components with 21.5 per cent; fabrics made from natural fibres (13.5 per cent); aluminium (13 per cent); automobiles (12 per cent); processed seafood (11.3 per cent); fresh milk; (10 per cent); and rolled steel (9.6 per cent).

As of April 1, the number of employees working in industrial enterprises rose 1.3 per cent month-on-month and 4 per cent year-on-year.

Labourers in State-owned enterprises decreased 4 per cent year-on-year, while those in non-State firms slumped 2.4 per cent, and foreign-invested businesses increased 5.3 per cent.

By industry, the number of employees working in mining enterprises decreased 2 per cent year-on-year; those in processing and manufacturing firms and water supply and waste and wastewater treatment surged by 4.3 per cent and 2 per cent, respectively.