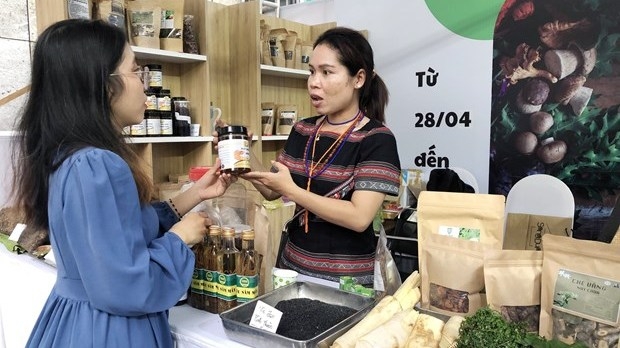 A booth at the festival (Photo: VNA)

NDO/VNA – More than 1,000 kinds of Vietnamese spices have been put on show at a four-day festival that kicked off in Ho Chi Minh City on April 28.

With more than 50 booths, nearly 100 businesses are showcasing special spices that have won the favour of both domestic and foreign customers.

The festival is intended to raise contributions of spices to Vietnam’s agriculture-based economy and the national economy in general, and promote trade for local spices, said Ly Kim Chi, President of the Ho Chi Minh City Food and Foodstuff Association.

Within the framework of the festival, a Vietnamese spice map made debut, popularising spice products granted with the geographical indication and those that satisfy the One Commune One Product (OCOP) standards.

Le Huynh Minh Tu, Deputy Director of the municipal Department of Industry and Trade, said the move has also created momentum for businesses in the industry to develop sustainably, and helped improve public awareness and knowledge about domestic farm produce and spices.

The department always creates optimal conditions for enterprises to seek new materials, processing methods and markets, thus contributing to progress of Vietnam’s agriculture as well as its agriculture-based economy, he affirmed.