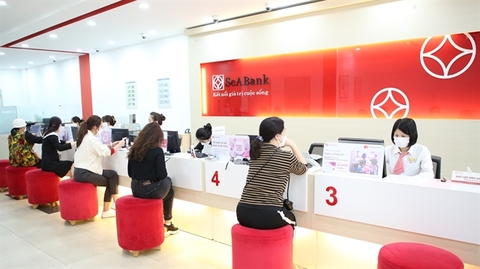 Accordingly, the bank's total assets reached VND231.2 trillion by the end of March 31, an increase of VND19.6 trillion compared to December 31 last year.

The bank successfully offered more than 181.3 million shares to existing shareholders, completing an increase in charter capital to VND16.6 trillion in the first quarter of this year.

At the annual general meeting of shareholders last week, SeABank approved a plan to increase charter capital from VND16.6 trillion to VND22.7 trillion.

SeABank aims to grow its total assets by 10 per cent this year. Credit growth is expected to be up to 17 per cent, depending on the approval of the State Bank, equivalent to net growth of VND24 trillion compared to last year.

The bank set a target of pre-tax profit of VND4.9 trillion this year. The bad debt ratio is controlled at below 2 per cent.

SeABank achieved a pre-tax profit of more than VND3.3 trillion last year, up 89 per cent year-on-year and completing 135 per cent of last year’s plan.