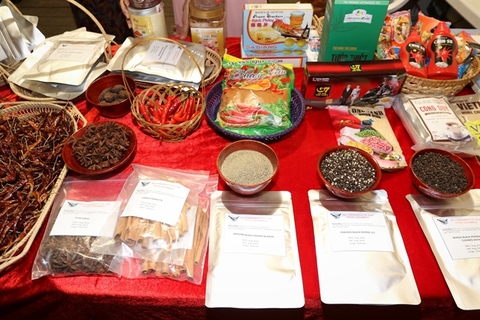 According to the Trade Promotion Agency, Viet Nam’s agricultural sector and the spices and seasonings industry have enjoyed a remarkable transition, turning the country into a global supplier of those products.

Among Vietnamese spices, peppercorn has gained a foothold in the international market and accounts for a lion’s share of exports.

Demand for peppercorn and other spices is on the rise while global exports have been declining due to the ongoing COVID-19 pandemic, whose fallout includes skyrocketing logistics fees.

Dh Foods Joint Stock Company has signed a deal with the US’s Heritage Beverage Company making it the exclusive distributor of its speciality spices in that country, and plans to ship 10 containers this year starting in the third quarter.

Its general director, Nguyen Trung Dung, hopes that Heritage will help his company conquer the Asian food market in the US, which is valued at US$40 billion and serves 30 million people of Asian origin, including three million from Viet Nam.

It is estimated that more than 80 per cent of supermarkets have Asian food stalls.

Saudi Arabia is one of the largest importers of Vietnamese spices.

The Middle Eastern nation consumes many kinds of spices, mainly imported, including from Viet Nam.

But Middle Eastern people have a habit of seeing, touching and feeling products before ordering them, and so businesses should send samples to customers first.

They should also send their goods to the Trade Office for display at the showroom for Viet Nam's export staples.

Bui Trung Thuong, Viet Nam's trade counsellor in India, said that country’s annual imports of flavourings and spices were worth $1.4 billion, with pepper accounting for $120 million. But only $20-30 million worth of pepper was imported from Viet Nam, he said.

To increase exports to India, he said businesses should step up the use of technology and study the spices from other countries available in the market to make products that better meet the tastes of customers.

With its tropical weather and diverse range of eco-systems, Viet Nam is rich in spices, including many special and popular ones such as cinnamon, anise, pepper, cardamom, and chilli.

It is one of the leading exporters of a number of spices such as peppercorn, of whose global exports it accounts for a whopping 90 per cent.

Vietnamese products are becoming better thanks to improved technology at all stages from cropping and harvesting to processing and packaging.