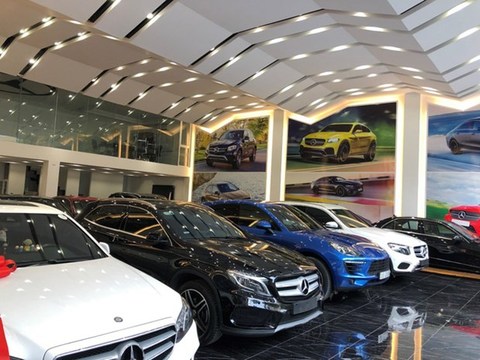 This was the first month of this year where auto sales of VAMA members had strong growth, after decreasing by 34 per cent in January and 26 per cent in February.

In March, passenger car sales surged 62 per cent on month to nearly 28,491, while 7,794 commercial vehicles found customers, up 63 per cent, and 677 special-use cars were sold, up 41 per cent, according to the report.

Sales of domestically-assembled cars and completely built-up (CBU) cars increased by 50 per cent to 21,863 units and 82 per cent to 15,099 units per month, respectively.

In the first three months of 2022, VAMA members sold 90,506 units, up 27 per cent year on year, of which passenger cars were up by 39 per cent, commercial vehicles up by 7 per cent and special-use vehicles up by 32 per cent.

During the first three months, sales of domestically-assembled cars and imported CBU cars increased by 34 per cent and 17 per cent year on year, respectively.

The market performance showed that in the first three months of 2022, the consumers chose to buy domestically-assembled cars to enjoy an incentive of reducing 50 per cent in registration fees according to the Government's Decree 103/2021/ND stipulating the level of the registration fee for domestically manufactured and assembled automobiles. This registration fee reduction has been applied from December 1, 2021, to May 31, 2022.

With sales growth of 60 per cent on the month and 27 per cent on the year in the first quarter of this year, this was an impressive figure in car sales while the market is still being hit by the COVID-19 pandemic and facing a shortage of chips and other parts.

Experts said that along with control of the COVID-19 pandemic in Viet Nam and the reduction in the registration fees, the domestic auto market would continue its strong growth. The country’s auto sales are expected to reach 500,000 units this year.

The Vietnam Motor Show, the largest in Viet Nam, will return this October following two years of postponement due to COVID-19.

The show will take place at the Saigon Exhibition and Convention Center in HCM City on October 26-30.

At least 11 carmakers, including Audi, Honda, Jeep, Mercedes-Benz, Lexus, Mitsubishi, MG, Subaru, Toyota, Volkswagen, and Volvo, have registered to participate, according to organisers.

In addition to members of VAMA and the Vietnam Car Importers Association, the event will see the participation of several manufacturers and importers of motorcycles and several businesses in the supporting industry.

Workshops and conferences will also be held on the sidelines of the event, including one to discuss the global trend of electric vehicles and the future development of the Vietnamese automobile industry.