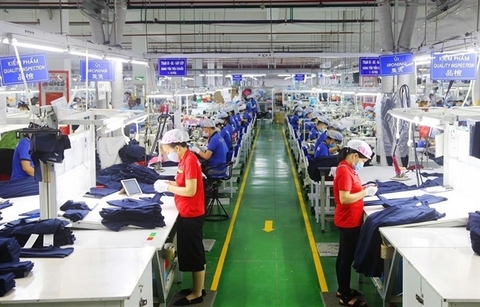 Up to $4.06 billion of capital was added by foreign businesses to 228 operating projects in the period, up 93.3 per cent year-on-year, according to the General Statistic Office (GSO).

According to the GSO, 322 new foreign projects, capitalised at $3.21 billion, were licensed in the first three months, up 37.6 per cent in the number of projects but down 55.5 per cent in capital year-on-year.

The Foreign Investment Agency (FIA) attributed the substantial decline in newly-registered capital to fact that some large-scaled projects worth over $100 million were already registered in the first quarter of 2021. Capital pledged to such projects accounted for 75.3 per cent of the country's total registered capital in the reviewed period.

For example, among these projects were the Long An I and II LNG power project, being invested by Singaporean investors in Long An Province with a total registered capital of over $3.1 billion and the $1.31 billion O Mon II thermal power plant being financed by Japanese investors in Can Tho City.

Meanwhile, the first quarter of this year saw only one foreign-invested project worth over $1 billion. That was a LEGO Manufacturing Viet Nam plant, valued at $1.32 billion, in Binh Duong Province, the FIA said.

In another bright spot, foreign investor capital contributions and share purchases doubled over the same period last year to $1.63 billion, which brought the total foreign investments into the country in Q1 to $8.9 billion, equivalent to 87.9 per cent of the last year's same period.

The agency said many projects on manufacturing electronic and high-tech products have raised their level of capital in the first three months of the year.

The processing and manufacturing sector lured the largest share of FDI with over $5.3 billion, accounting for 59.5 per cent of the country's total capital.

From January to March, Singapore was Viet Nam's leading foreign investor with nearly $2.29 billion, making up almost 25.7 per cent of the total FDI registered in the country. South Korea followed with more than $1.61 billion or 18 per cent, and Denmark with $1.32 billion or 15 per cent.

At the same time, Vietnamese firms invested $211.5 million overseas in Q1, down 63 per cent year-on-year, according to the FIA.

Earlier, economic experts said Viet Nam remained an attractive destination for foreign investment, which was likely to experience a surge in 2022 after a long hiatus due to the pandemic.

An increase in the number of new projects and investments in existing projects showed the strong confidence of foreign firms in the country's investment environment, they said.

Do Nhat Hoang, head of the FIA, said the country had been working with foreign partners looking to relocate their production centres. "Bringing their investment home was an effective way to support Vietnamese firms in integrating into the global supply chain," he said.

Hoang said foreign investment was likely to pick up in 2022 as countries worldwide reopened and learned to adapt to the new normal post-pandemic.

Takeo Nakajima, head representative of the Japan External Trade Organisation, said Viet Nam would continue to be one of the most attractive investment destinations for Japanese firms, especially after the visit to Japan by Prime Minister Pham Minh Chinh, who oversaw 25 cooperation agreements worth up to $12 billion.

The agreements have set up a strong foundation for Japanese investment to flow into Viet Nam in 2022 and the near future, said Nakajima.

European firms have also been showing stronger confidence in the Southeast Asian economy.