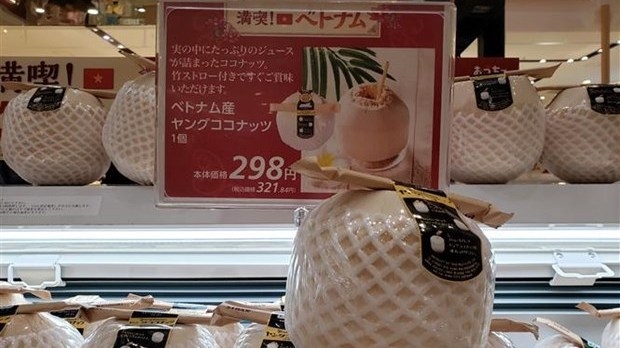 NDO/VNA – Vietnam has become a big supplier of agricultural products for the Japanese market and Asia in general, but ample room remains for the country to boost export to Japan, as Vietnamese goods now account for only 3 percent of Japan’s total import value, heard a workshop on March 29.

The hybrid workshop, jointly held by the Ministry of Industry and Trade (MoIT)’s Vietnam Trade Promotion Agency and the ASEAN-Japan Centre (AJC), aimed to improve Vietnamese enterprises’ capacity for agricultural export to Japan.

Ta Duc Minh, Trade Consular at the Vietnamese Embassy in Japan, stressed that Vietnam has strength in agro-fishery products that are in great demand in Japan.

However, Japan has non-tariff measures to protect domestic production, he said, noting the country’s strict requirements in terms of food hygiene and safety, and animal and plant quarantine, along with high travelling and transportation costs, among others.

Tran Quoc Toan, deputy head of the Import-Export Department at the MoIT, said Vietnam is Japan’s 10th biggest supplier of vegetables and fruits, making up about 1.7 percent of Japan’s import value.

Vietnam and Japan have signed four free trade agreements, which have given competition advantages to Vietnamese businesses in the market, according to the official.

Enterprises need to improve production capacity and work to ensure the supply as well as product quality, play a more active role in trade promotion, and stay updated on the local taste, he said.