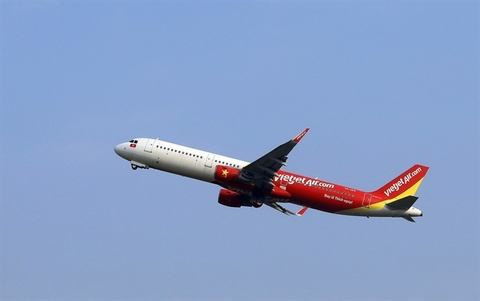 On the Ho Chi Minh Stock Exchange (HoSE), the VN-Index ended the trading day at 1,446.25 points, down 20.29 points or 1.38 per cent. However, it pared some losses from the morning session. The index declined by 20.56 points in the morning trade.

The market’s breadth was negative with 349 stocks decreasing, while liquidity was lower compared to the previous session. Of which nearly VND27.2 trillion (US$1.2 billion) worth of shares, equal to over 858.56 million shares, was traded on HoSE.

During the session, nearly 142.6 million shares were traded on the northern bourse, worth over VND4.2 trillion.

Strong selling pressure caused a steep slide in the market, with up to 22 stocks in HoSE’s large-cap group plummeting, while only six stocks edged higher.

Data compiled by vietstock.vn showed that PV Gas (GAS) was the stock weighing the market the most, down 6.11 per cent. Many other oil and gas stocks also witnessed sharp falls since the market opened, such as PVDrilling (PVD) down 3.91 per cent, PVChem (PVC) down 10 per cent - the biggest daily loss on HoSE, PVOil (OIL) down 7.84 per cent, Petrolimex (PLX) down 3.62 per cent, and Binh Son Refining and Petrochemical Company Limited (BSR) down 6.86 per cent.

Cushioning the market’s downtrend was the rallies of airlines stocks, of which Vietjet Aviation JSC (VJC) led the uptrend with a gain of nearly 4.7 per cent. It was followed by Vietnam Airlines (HVN), up 1.36 per cent.

Meanwhile, foreign investors also fled the market after selling a net value of VND707.96 billion on the two main exchanges. Of which, they net sold a value of VND725.17 billion on HoSE, while net bought VND17.21 billion on HNX.