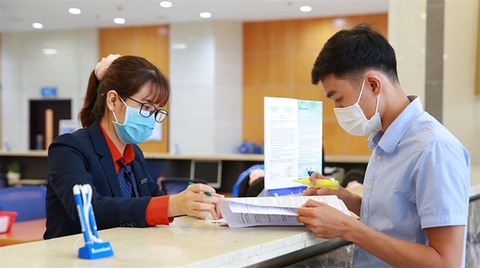 The market’s breadth was negative as 132 stocks increased, while 322 stocks declined. And liquidity rose sharply compared to the last session, with more than 810.7 million shares traded on HoSE, worth VND25.92 trillion (US$1.4 billion).

The index’s downtrend was due to losses in large-cap stocks, especially bank stocks. The 30 biggest stocks tracker VN30-Index plunged by 40.85 points, or 2.64 per cent, to 1,505.07 points. Of which, six stocks of the VN30 basket climbed, while 24 stocks slid with one stock hitting the floor price.

Data compiled by vietstock.vn showed that Vietcombank (VCB) led the losing group, down 4.44 per cent. Other bank stocks posting big losses were BIDV (BID), Vietinbank (CTG), Techcombank (TCB), MBBank (MBB) and Sacombank (STB). These stocks decreased at least 4.1 per cent, while STB even hit the biggest daily loss of 7 per cent.

On the other hand, some stocks still attracted capital flows, cushioning the index’s pull back. Accordingly, PV Gas (GAS) was the biggest gainer in the market, up 4.5 per cent, mostly thanks to the strong rally in the international market of oil prices.

Petrolimex (PLX) also saw a gain of 1.35 per cent yesterday.

News in Viet Nam to welcome all international flights also supported airline stocks. Of which, Vietjet Aviation JSC (VJC) was up 5.42 per cent, while Vietnam Airlines JSC (HVN) rose 0.76 per cent.

During the session, investors poured nearly VND2.3 trillion into the northern market, equivalent to a trading volume of 78.6 million shares.