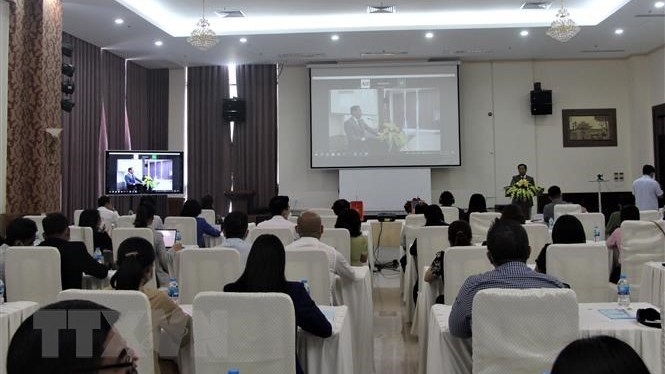 A seminar is held in An Giang province on January 20 to promote trade and investment between the US and the Mekong Delta localities. (Photo: VNA)

NDO/VNA – A seminar was held in An Giang province on January 20 to promote trade and investment between the US and the Mekong Delta localities.

The event was hosted by the People’s Committee of An Giang, US Consulate General in Ho Chi Minh City’s Trade Office, and the Ministry of Planning and Investment’s Investment Promotion Centre for the south.

It aims to introduce business and investment opportunities in the Mekong Delta province of An Giang and some other regional localities to potential US partners and to effectively boost trade and investment between the two countries.

In his remarks, Vice Chairman of the provincial People’s Committee Tran Anh Thu said An Giang is part of the regional key economic zone which has seen strong growth in fishery exports and maintained a leading position nationwide in production of rice and tra fish as well as the maritime economy.

The zone is witnessing strong capital flows into infrastructure development, logistics services and others. However, foreign investment into these sectors still lags behind those in the nearby region, Thu said, noting that although agricultural and fishery products from the Mekong Delta have found their way into the US market, trade between the US and the Vietnamese region remains limited.
Given that the governments of Vietnam and the US have agreed to boost bilateral trade and investment, it is important for regional enterprises to have clear understanding of the US’s regulations.

During the event, the US Trade Office briefed the regional businesses on investment programme SelectUSA, and SelectUSA Investment Summit to be held in National Harbour, the state of Maryland in June 2022.