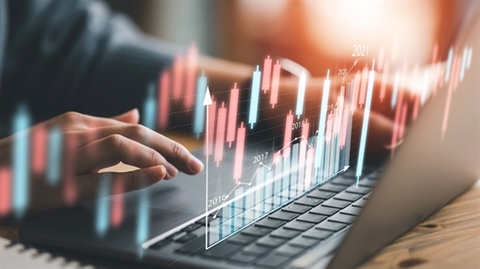 Market breadth was negative with more than 350 stocks declining, while 115 stocks rose. However liquidity was higher than in the previous session, of which over 480.6 million stocks were traded on HoSE, worth nearly VND16 trillion (US$698.5 million).

Foreign investors, meanwhile, were net buyers on the southern market, with a value of VND89.16 billion.

Nineteen of the 30 biggest stocks in the VN30 basket dropped, while 11 stocks increased in the morning trading.

Vietnam Rubber Group (GVR) was the leader of the market's downtrend with a loss of 3.64 per cent.

Also weighing on the market were many big realty stocks witnessing significant falls. These stocks were Becamex (BCM), down 3.55 per cent, Novaland (NVL), down 2.56 per cent, and Vincom Retail (VRE), down 1.24 per cent, and Development Investment Construction JSC (DIG), down 7 per cent.

The other two stocks in the Vin family, Vingroup (VIC) and Vinhomes (VHM), decreased by 0.1 per cent and 0.85 per cent, respectively.

The losses were capped by gains in some large-cap stocks, mostly in the banking sector. Accordingly, Vietcombank (VCB) was the biggest gainer this morning, up 5.28 per cent. Bank stocks including BIDV (BID), Vietinbank (CTG) and MBBank (MBB) also posted strong gains of at least 2.4 per cent.