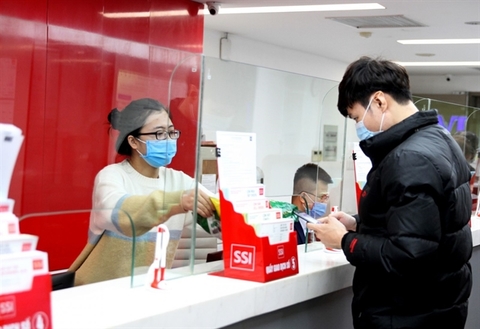 The market's breadth was negative with only 122 gainers and 346 losers.

During the session, over 1.25 billion shares were traded on the southern bourse, worth nearly VND36 trillion (US$1.59 billion).

The benchmark's downtrend was due to losses of many large-cap stocks, especially in the securities sector.

Of the VN30 basket, 22 stocks slid, while only six inched higher and two ended flat.

During the trading session, investors poured nearly VND3.9 trillion into the bourse, equivalent to a trading volume of more than 138 million shares.

The Finance Ministry has demanded clarification over a 20-minute glitch on the Ho Chi Minh Stock Exchange (HoSE) on Monday when the price list was “frozen” but orders were still being matched.

The glitch, which happened at around 2pm Monday, had many investors trading blind. The ministry said the Viet Nam Stock Exchange should submit a clarification for the glitch within the day.

Some securities companies sent information to investors, saying there was an error in linking price data with the HoSE.

The ministry asked HoSE to work urgently with information technology companies and apply technical measures and prepare contingency plans so that the system remains stable in the coming sessions.

In July 2021, HoSE’s new system was running smoother and faster than before, but investors at several brokerages still had trouble placing orders. The new system was developed in 100 days by FPT Information System staff in order to resolve frequent overloading on HoSE’s outdated system that had remained mostly unchanged for 20 years.