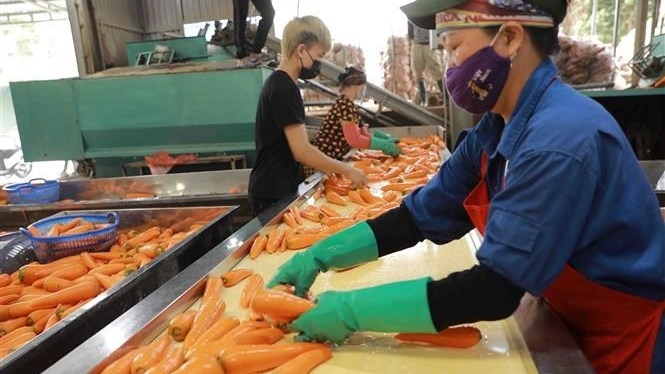 NDO/VNA - Firms in the northern province of Hai Duong on January 11 shipped nearly 250 tonnes of carrots to the Republic of Korea (RoK), the first overseas shipment of the vegetable this year.

Another batch of around 375 tonnes is scheduled to be sent to the RoK on January 12.

Chairman of the Board of Directors of Ameii Vietnam company Nguyen Khac Tien said this year, the RoK bought Vietnamese carrots at high prices. His company has reached deals with Korean partners to export roughly 5,000 tonnes this year.

According to the provincial Department of Agriculture and Rural Development, the province has about 1,500ha of carrot during the 2021-2022 winter crop with an estimated output of approximately 65,000 tonnes, up over 7 percent from 2020. Its prices are now 4,000 – 5,000 VND per kg higher than that last year.

Vice Chairman of the provincial People’s Committee Tran Van Quan said Hai Duong targets expanding markets for farm produce and carrots in particular via boosting production up to international standards, improving post-harvest processing and production connectivity to raise farm produce’s value. At the same time, the province will step up brand building and trade promotion at home and abroad.