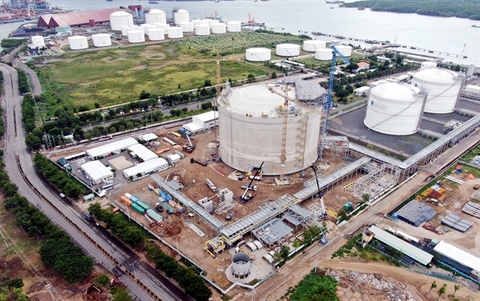 The market's breadth was negative, while liquidity decreased compared to yesterday. During the session, over 1 billion shares were traded on the southern bourse, worth nearly VND32 trillion (US$1.4 billion).

The benchmark's downtrend was due to losses of many large-cap stocks, especially in real estate and banking sectors. The VN30-Index, which tracks 30 biggest stocks on HoSE, fell 12.71 points, or 0.82 per cent, to 1,532.24 points.

Of the VN30 basket, 21 stocks slid, while only eight inched higher and one ended flat.

In the top five influencing the downtrend, Vingroup (VIC) posted the biggest losses, down 2.2 per cent. Other stocks included Vietinbank (CTG), Novaland (NVL), VPBank (VPB) and Southeast Asia Commercial Joint Stock Bank (SSB), which decreased in a range of 1.56 - 3.41 per cent.

However, it pared some earlier losses thanks to gains in some big stocks.

Data compiled by vietstock.vn showed that PV Gas (GAS) extended its uptrend, up 3.66 per cent. It was followed by gains in BIDV (BID), Becamex (BCM) and Development Investment Construction JSC (DIG), with BCM and DIG hitting the biggest daily gain of 7 per cent.

During the trading session, investors poured nearly VND4.4 trillion into the bourse, equivalent to a trading volume of more than 153.3 million shares.

Analysts of MB Securities JSC (MBS) said in a daily report that in the near future, cash flows will continue to look for opportunities in small- and medium-cap stocks. Besides, there has been a shift to blue-chips, mainly bank stocks for the long-term target, they added.

On the other hand, foreign investors were net sellers on the market, with a total value of VND400.67 billion.